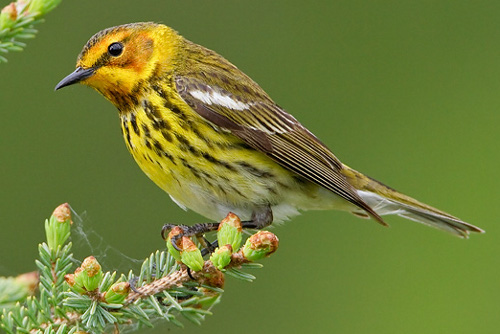 Characteristics and Range This "little tiger", as the Latin tigrina suggests, is one of British Columbia's prettiest warblers. The yellow underparts of the male Cape May Warbler are extensively streaked with narrow black stripes; this tiger-belly is complemented by an olive back, chestnut cheeks on a yellow face, and white wing patches. The Cape May Warbler is a long distance migrant that breeds across the Boreal Forest, from northeastern British Columbia to the Atlantic Coast, and winters in the Caribbean and along the east coast of Central America. Its breeding distribution is linked with the distribution and timing of infestations of Spruce Budworm (Choristoneura fumiferana) on mature and old-growth spruce (Picea) and mixed wood stands (Baltz and Latta 1998, Cooper et al. 1997).

Distribution, Abundance, and Habitat The Cape May Warbler is widely distributed across northeastern British Columbia where the Atlas has greatly filled distribution gaps in the Taiga Plains and Boreal Plains ecoprovinces compared to when The Birds of British Columbia was published in 2001. The Atlas data show a range expansion into the Sub-Boreal Interior and Northern Boreal Mountains ecoprovinces where virtually no records existed before. Future surveys will determine whether this new range is permanent or an ephemeral influx in response to environmental conditions (e.g. budworm outbreaks).

The Probability of Observation is generally very low, with the highest chance of finding the species in the Fort Nelson River lowlands in the Taiga Plains Ecoprovince. However, the small sample of point counts suggests that abundance is similarly low across the Boreal White and Black Spruce biogeoclimatic zone in the Taiga Plains and Boreal Plains ecoprovinces and the recently colonised Sub-Boreal Spruce biogeoclimatic zone in the Sub-Boreal Interior Ecoprovince.

No elevation preference was apparent from the small sample, but the majority of observations at lower elevations (250 - 750 m) expand the range noted by Campbell et al. (2001). Most of the records above 900 m represent the new range in the Sub-Boreal Interior, but one record above 1,000 m came from the Taiga Plains. Campbell et al. (2001) note that the Cape May Warbler is found in mature spruce forest in river drainages and on plateaus in the northeast. This is also true of the habitat where it was found in the Sub-Boreal Interior: in coniferous forests, especially mature spruce stands with openings, often near water. Occurrences of the Cape May Warbler in this ecoprovince became somewhat predictable by the Atlas field crews working in this habitat.

Conservation and Recommendations The Cape May Warbler is rapidly declining throughout its range; the population is thought to have halved over the past four decades (NABCI-U.S. 2014). Atlas data indicate that the species is more widespread in British Columbia than was previously believed, however, and in 2015 the British Columbia Conservation Data Centre moved it from the Red List (Threatened) to the Blue List (Vulnerable). Habitat loss from the harvest of valuable mature spruce is a concern, as is oil and natural gas extraction that is fragmenting the Boreal Forest. Future monitoring could usefully aim to track and understand the mechanisms behind the current western range expansion.