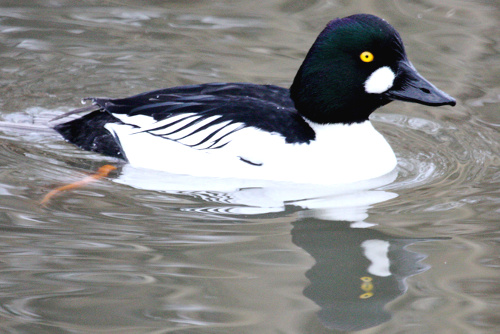 Characteristics and Range The Common Goldeneye is one of the first diving ducks to arrive in the interior in spring and the last to migrate south in fall. Often considered a harbinger of spring, the distinctive whistling noise of its wings in flight has given it the nickname of "whistler", and announces its arrival at the first patches of open water at ice break-up. It breeds mostly throughout forested areas across northern North America and northern Eurasia; it winters on coasts and large inland freshwater bodies, in North America as far south as northern Mexico (Eadie et al. 1995). In British Columbia, it generally winters along nearshore coastal areas and will winter as far north as open water permits in the interior (Campbell et al. 1990).

Distribution, Abundance, and Habitat The Common Goldeneye breeds throughout British Columbia except for Haida Gwaii where breeding is suspected, but not confirmed. There are few nesting records in coastal areas. Breeding was not known from Vancouver Island when The Birds of British Columbia was published in 1990, but is confirmed during the Atlas at two locations and probable in two others. Atlas work shows that the similar Barrow's Goldeneye is generally a more frequently encountered breeder in the interior, except in the Peace River lowlands and the Southern Rocky Mountain Trench. The Probability of Observation model confirms that these two areas, in the Boreal Plains and Southern Interior Mountains ecoprovinces, are areas where the Common Goldeneye is more likely to be found.

Conservation and Recommendations Commercial logging of mature and older forests near waterbodies likely impacts the amount and quality of Common Goldeneye nesting habitat. Additionally, firewood collection that targets standing dead trees that may have potential nesting cavities may also impact local breeding habitat. The impacts of the recent Mountain Pine Beetle (Dendroctonus ponderosae) infestation and the subsequent harvesting of infected mature stands should be studied to determine if there are any negative impacts on local Common Goldeneye breeding populations.