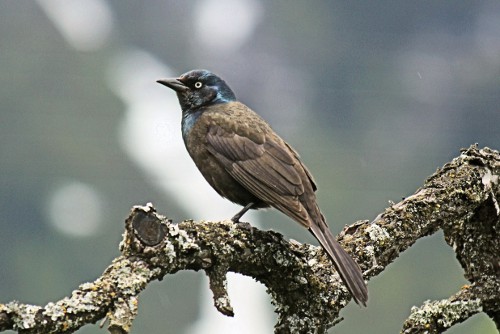 Characteristics and Range The Common Grackle is a large blackbird shimmering with purple and blue iridescence on its head, back, and breast, and with a long tail that seems to steer it through the air like a ship's rudder. It is an eastern bird that makes its way into parts of northeastern British Columbia like so many other bird species that have their ranges centred in eastern North America. The Common Grackle benefitted from the clearing of forests for agriculture over the 19th and 20th centuries. Its population size and range expanded greatly during that period, such that it now occupies much of North America east of the Rocky Mountains, from the Southern Coastal Plains to the Boreal Forest, where it is a resident and short-distance migrant (Peer and Bollinger 1997). It has a delightful way of proclaiming its territory: the males puff themselves up before releasing a not unlovely screech that is a familiar sound across much of southern Canada.

Distribution, Abundance, and Habitat The Peace and Fort Nelson river lowlands, in the Boreal Plains and the Taiga Plains ecoprovinces respectively, remain the centres of the Common Grackle's distribution in British Columbia; a pattern that has not changed since The Birds of British Columbia was published in 2001. The Atlas surveys discovered local, isolated breeding populations in the Elk River valley in far southeastern British Columbia, and along the middle Fraser River in the Cariboo in the centre of the province. These are probably recently established populations. The Probability of Observation model also highlights the Liard River as a potential area of occurrence, based on a single record in potentially suitable breeding habitat. The Common Grackle is not a common breeder anywhere in the province, and too few data were collected on Atlas point counts to meaningfully describe abundance.

In British Columbia the Common Grackle is associated with human-modified environments, breeding in agricultural or other open areas, including wetlands, with scattered trees for nest sites. Breeding is confined to elevations below 750 m.

Conservation and Recommendations The Common Grackle is not of conservation concern in British Columbia, although Breeding Bird Survey data suggest it has declined in northwestern parts of its range over the past 40 years, paralleling its decrease of perhaps 20% across Canada in the same time period (Environment Canada 2014). However, it remains one of the most common birds in eastern North America, and came to be regarded as an agricultural pest to the extent that control measures were instituted to forcibly lower the population (Peer and Bollinger 1997). As a consequence, the population size of Common Grackle has decreased over the last 40 years, though not so much that its persistence on the landscape is threatened.