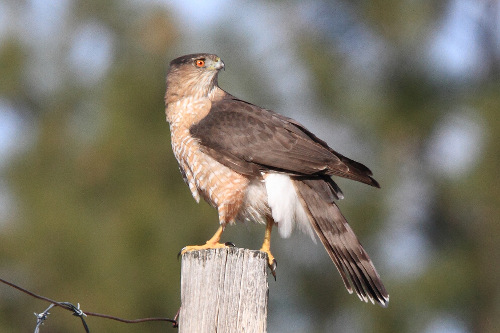 Characteristics and Range This medium-sized raptor is well-adapted to the wooded environments it inhabits with powerful, short, rounded wings and a long tail that enable it to steer and manoeuvre through clumps of trees. It is generally inconspicuous except in the mature suburban neighbourhoods that it has successfully colonised because they provide plentiful wooded-edge habitats and small bird and mammal prey supplies. Its range spans the continent south of the Boreal Forest to the forested hills of Mexico. Some northern populations migrate short to medium distances. Along with many other raptors, it suffered declines during the mid-20th Century as a result of pesticide accumulations and persecution, but has recovered and is now thriving (Curtis et al. 2006).

Distribution, Abundance, and Habitat It breeds rather patchily across southern and central British Columbia, the main clusters of breeding season distribution being in the Georgia Depression and the Southern Interior ecoprovinces. It has expanded its provincial range north and northwest from the known range when The Birds of British Columbia was published was published in 1990; breeding is now confirmed at several locations in the Peace River lowlands, with numerous possible breeding occurrences across the Interior and Nechako plateaus as far northwest as the Skeena Valley.

The Probability of Observation is low everywhere, and too few data are available to draw any conclusions on abundance. Slightly higher PObs values in the lower Fraser Valley, southeast Vancouver Island, and the Okanagan and Thomspon valleys indicate that these are the most likely areas to find this hawk.

Conservation and Recommendations Although Cooper's Hawks naturally occur at relatively low densities, there are no major conservation concerns. Populations have rebounded from the mid-1900s decline, and are now faring well in most parts of the continent, including British Columbia. The apparent range expansion in the province should continue to be tracked through programs like eBird, and future atlas efforts.