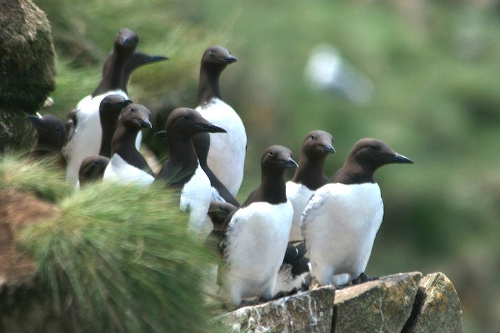 Characteristics and Range Although uncommon as a breeding species in British Columbia, the Common Murre is one of the most widespread and abundant seabirds in the Northern Hemisphere (Ainley et al. 2014). This dark, heavy-set seabird labours to get airborne from the ocean's surface, and must flap with short, rapid beats to remain aloft. However, it is in its element underwater, where it uses its smallish wings to help propel it to depths of up to 100 m in pursuit of small fish. Highly social and with a wide behavioural repertoire, the Common Murre breeds on flat-topped rocks and bare cliff ledges at densities that can exceed fifty pairs per square metre. It can be encountered year-round in continental shelf waters almost anywhere off the British Columbia coast.

Distribution, Abundance, and Habitat The Common Murre is known to have bred at only six sites in British Columbia, only two of which supported hundreds (Kerouard Islands) or thousands (Triangle Island) of breeding pairs (Hipfner 2005). Breeding has also been reported at Sartine Island, 15 km east of Triangle Island, and at three sites along the southwest coast of Vancouver Island (one or more of which might have been used between 2008 and 2012). The paucity of breeding sites in British Columbia could reflect a shortage of suitable habitat, and the inability of this open-nesting species to cope with disturbance by Bald Eagles.

This alcid is common on the water, but breeding sites are remote and inaccessible. The colony of several thousand breeding pairs at Triangle Island, the outermost of the Scott Islands, is active, and observed every year by Canadian Wildlife Service biologists. Observations are not made every year at the Kerouard Islands, at the southern tip of Haida Gwaii, where 200-300 pairs breed. Eagle disturbance severely impacts colony attendance at Triangle Island (Hipfner et al. 2011), probably does so at the Kerouard Islands as well, and may be a reason why potentially suitable breeding sites are not colonised.

The Common Murre is present in all seasons in productive, continental-shelf waters off the British Columbia coast. It breeds exclusively on remote islands, using cliff ledges or flat-topped rocks on headlands that provide direct access to the ocean.

Conservation and Recommendations The main breeding colonies in British Columbia are well protected: Triangle and Sartine islands are provincial Ecological Reserves and part of the Proposed Scott Islands Marine National Wildlife Area; the Kerouard Islands are part of the Gwaii Haanas National Park Reserve and Haida Heritage Site. The Common Murre is the most frequent bird victim of by-catch in commercial net fisheries operating along the British Columbia coast (Smith and Morgan 2005), and is the species most frequently found oiled on beached bird surveys here (Hamel et al. 2009). Most of the mortality probably involves individuals that originate from the larger breeding colonies to the south (Washington) and north (Alaska).