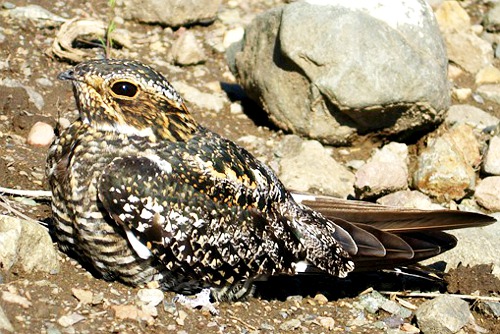 Characteristics and Range The Common Nighthawk is the most widespread nightjar in North America, with its breeding range extending across the continent from the Boreal Forest south to Central America (Brigham et al. 2011). It winters in the lowlands of central South America. It is a crepuscular aerial insectivore that forages by pursuing insects on the wing, sometimes in large flocks, across a wide variety of habitats, including wetlands, forests, and even well-lit streets (Brigham et al. 2011, Brigham and Fenton 1991). It is one of the latest spring migrants to British Columbia, often arriving in early June. Males perform aerial displays with shallow dives that create a "boom" sound as air rushes through their primaries (Campbell et al. 1990).

Distribution, Abundance, and Habitat The Common Nighthawk is a breeding visitor across most of British Columbia, absent only from the outer central coast, Haida Gwaii, and alpine areas. Most Atlas detections are concentrated within the southern half of the province, along the east side of Vancouver Island and southwest mainland coast, and in southern interior valleys. Fewer records came from the central and northern portions of the province, with the exception of the Peace River valley, which supports a dense cluster. This distribution is largely unchanged since the late 1980s (Campbell et al. 1990).

The most extensive, high Probability of Observation values are in the valley systems of the Southern Interior, Central Interior and Southern Interior Mountains ecoprovinces, where highest abundances were also recorded on the small sample of point counts. Campbell et al. (1990) noted its centre of abundance to cover this portion of the province, plus Vancouver Island. During the Atlas, the likelihood of finding the species was lower in the Georgia Depression and Boreal Plains ecoprovinces despite these areas supporting dense clusters of records. Across the southern interior, the highest Pobs and abundance values overlap with Interior Douglas-fir, Ponderosa Pine and Bunchgrass biogeoclimatic zones, principally between 400 and 1000 m elevation.

Conservation and Recommendations Formally common across much of British Columbia (Campbell et al. 2006) and Canada, the Common Nighthawk is listed as Threatened in Canada under the Species at Risk Act, due to declines of up to 80% on the Breeding Bird Survey between 1968 and 2005 (COSEWIC 2007). The Breeding Bird Survey, however, provides only moderately reliable population indices because of the temporal mismatch between survey period and display period, and the lack of coverage across more remote areas (Rich et al. 2004). Monitoring programs tailored to this species and Common Poorwill have recently been established to better assess status and distribution (Noble and Knight 2015). Additional work is still required to investigate potential causes of the declines, particularly to determine the roles that pesticides or habitat destruction may have (Brigham et al. 2011, COSEWIC 2007).