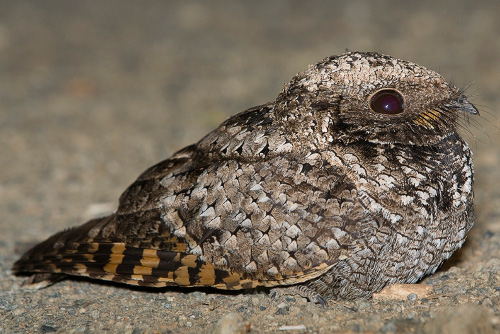 Characteristics and Range The Common Poorwill is a nocturnal nightjar, with relatively little known about its biology. It is, however, unique in being the only species of bird known to hibernate (Woods and Brigham 2004). Most calling birds are detected on moonlit nights (Noble and Knight 2015, Brigham and Barclay 1992). It usually forages from the ground, often from gravel roads or a low perch, from which it sallies upward to catch flying insects (Brigham and Barclay 1992). The Common Poorwill breeds across open and dry wooded areas of western North America, from the southern Canadian Prairies and Great Basin regions to central Mexico. Little is known about its migration; in winter it is known only from the southern part of its breeding range, where wintering birds can remain in hibernation for up to 90% of days (Woods et al. 2005).

Distribution, Abundance, and Habitat The Common Poorwill's breeding season distribution is restricted to a few dry valleys across the Central Interior, Southern Interior, and Southern Interior Mountain ecoprovinces. The breeding distribution shown in the Atlas is similar to the overall distribution when the The Birds of British Columbia was published in 1990, with midsummer occurrence confirmed for the first time by the Atlas surveys in the Nicola and Middle Fraser valleys of the Central Interior Ecoprovince. The increase may be a result of increased coverage and knowledge of their behaviour and habitat preferences, instead of a real increase in the breeding range.

The Probability of Observation model predicated that Common Poorwill is most likely to occur in the Southern Rocky Mountain Trench, and the Okanagan, Fraser, and Kettle valleys, but even in these areas PObs values are very restricted and generally low. Due to its nocturnal nature, the Common Poorwill was detected too infrequently on point counts to draw conclusions about abundance across the province. All point count detections were within the Ponderosa Pine, Bunchgrass, and Interior Douglas-fir biogeoclimatic zones, and between 500 and 900 m elevation, similar to what was reported in Campbell et al. (1990).

Conservation and Recommendations The status of this species in Canada is relatively unknown, due to its poor coverage by the Breeding Bird Survey; it was assessed by COSEWIC in 1993 as Data Deficient (Environment Canada 2011). Little is known about the complete range extent, population trend, productivity, or survival in British Columbia, data needed to inform conservation programs. Specialized surveys are required to monitor this species, and these should focus on creating long-term population trends, determining the complete range extent in the province, annual productivity, and survival.