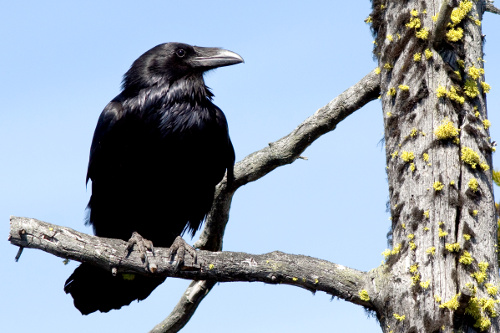 Characteristics and Range Perhaps no bird on earth is steeped in so much lore, reverence, and infamy as the Common Raven. The world's largest songbird, its glossy black plumage, guttural voice, famous intellect and abundant presence in symbolism and culture make it one of British Columbia's most intriguing and recognizable species. The Common Raven is the most widely distributed member of the corvid family, resident across the Northern Hemisphere in Europe, Asia and North America (Boarman and Heinrich 1999). The Raven has been celebrated by cultures all across its range, and for many First Nations in British Columbia the Raven is of particular cultural importance. Ravens are among the most intelligent of all animals; they are adept problem solvers and possess a highly complex social system, reinforcing their reputation in myth and folktale as cunning tricksters and sources of wisdom (Boarman and Heinrich 1999). Adept scavengers, Common Ravens are often associated with large carnivores, especially wolves, but their resourcefulness and wide range of potential food items has allowed them to thrive in nearly every available habitat within their range, from urban garbage dumps to deep rainforests and high alpine tundra.

Distribution, Abundance, and Habitat The Common Raven is universally established throughout interior and coastal British Columbia, with confirmed breeding in every ecoprovince. The relatively even probability of observing ravens across the province matches their distribution, with low PObs values only at very high altitudes. Abundance is also relatively even across the province, with point counts suggesting it may be highest in the Georgia Depression and lowest in the Taiga Plains. The Atlas data appear to be very consistent with the data from The Birds of British Columbia published in 1997, with no significant changes in breeding range or abundance between the two publications.

The Common Raven is found across a wide attitudinal range, being most common below 1,250 m, but occasionally occurring as high as 2,250 m. Ravens can be found in almost every habitat, from open tundra to old growth rainforest. They tend to be less partial to urban environments than other corvid species, but are readily found in landfills, farmlands, and other habitats with high human presence (Boarman and Heinrich 1999). Their ideal habitat appears to be heavily contoured landscapes which provide cliffs or other structures for nesting sites and promote thermals for soaring (Boarman and Heinrich 1999), and there are few places on earth that are more contoured than the extensive mountainous regions of British Columbia.

Conservation and Recommendations This species is of no conservation concern: the Breeding Bird Survey trends show that Common Ravens have been increasing in North America since the 1970's with widespread, large population increases (Sauer et al. 2014). This upward trend combined with a vast range and versatile life history should safeguard raven populations for the foreseeable future.