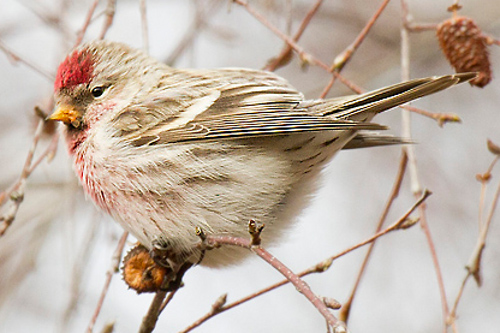 Characteristics and Range The breeding range of the acrobatic and chattering Common Redpoll spans the northern boreal and taiga forests of both the Old and New Worlds. In North America, it is observed in its more southern wintering range during irruptive years when northern seed crops fail. It winters from the northern boreal south to the Great Lakes, central Prairies and central Rocky Mountains, and farther south in irruption years. It is an energetic winter visitor to bird feeders in much of British Columbia, and is another northern species that reaches the southern limit of its breeding range in northern parts of the province.

Distribution, Abundance, and Habitat The majority of Atlas records of Common Redpoll are from the Northern Boreal Mountains Ecoprovince, with the biggest cluster in the far northwest, similar to the known summer range when The Birds of British Columbia was published in 2001. As it winters in much of interior British Columbia, early summer records may refer to late migrants. Highest winter numbers are in the Sub-Boreal Interior Ecoprovince (Campbell et al. 2001), so care was taken not to mistake obvious late migrants for possible breeders. All of the Atlas records of Common Redpoll outside of the Northern Boreal Mountains were in high elevation habitat, including areas adjacent to the Salmon Glacier in the Northern Pacific Rainforest Bird Conservation Region. The records further south along the Rocky Mountains were also in suitable breeding habitat, so it is possible this species nests occasionally much further south. This may happen when wintering birds find suitable breeding habitat and stay into the summer to nest, something that has happened occasionally across southern Canada from Alberta to Quebec following winter irruptions ([ref #UWUGN746]Knox and Lowther 2000).

There was insufficient data to quantify abundance but Probability of Observation is highest in the Northern Boreal Mountains where redpolls were recorded from 680 to 1,450 m, with the highest abundance recorded between 750 and 1,000 m. Like many northern breeding species in British Columbia, it shows an altitudinal decline with increasing latitude and longitude, being found at lower elevations in the far northwest (the Chilkat Pass area) versus higher elevations into the northern Cassiar and Rocky Mountains. Its furthest south and east record was in the southern Rocky Mountains at 1,820 m.

Surveying for redpolls is difficult in northern British Columbia, due to the remote and inaccessible nature of the species' subalpine habitat. It may breed in a wider range of the Northern Boreal Mountains than illustrated by the Atlas. Common Redpolls inhabit open subarctic and subalpine coniferous forest and scrub, mixed and deciduous woods, comprising stunted pine (Pinus), spruce (Picea), alder (Alnus), birch and dwarf birch (Betula), and willow (Salix) species ([ref #UWUGN746]Knox and Lowther 2000).

Conservation and Recommendations Common Redpoll populations are generally not well monitored because most Breeding Bird Survey routes lie south of the breeding range. Christmas Bird Count data show erratic changes in winter numbers due to irruptive movements, but the long-term trend is stable so there are no major conservation concerns (Environment Canada 2011).