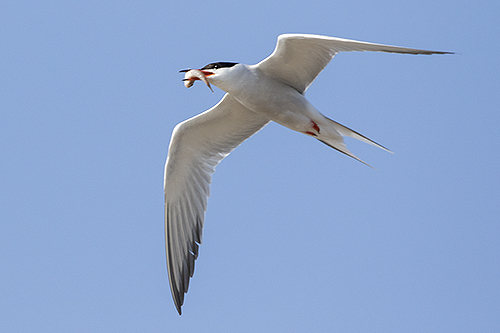 Characteristics and Range This long-distance migrant has a cosmopolitan global distribution, being found on every continent except Antarctica. In North America, the Common Tern breeds across much of the boreal, prairie and Great Lakes regions, and along the Atlantic Coast, reaching the western limit of its range just east of British Columbia (Nisbet 2002). That range generally appears to be stable, but the population has fluctuated. At the turn of the 20th Century, Common Tern feathers were highly sought after in fashion, driving a precipitous decline in eastern populations. Protection under the Migratory Bird Conservation Act led to a population rebound, but now some Atlantic Coast breeding populations are failing to produce any young because of dietary switches brought on by changes in available high-quality food (Gaston et al. 2009).

Distribution, Abundance, and Habitat The species is a regular passage migrant through parts of the province, but there are no breeding records from British Columbia (Campbell et al. 1990). All records reported to the Atlas are considered to relate to migrants. However, the species recently bred within 100 km of the province, along the Hay River in Alberta (Federation of Alberta Naturalists 2007), suggesting that the Common Tern could breed in the adjacent, remote and poorly surveyed far northeastern part of British Columbia. It nests on freshwater and marine islands.

Conservation and Recommendations Bird distribution and abundance in northeastern part of the Taiga Plains in British Columbia remains rather poorly known. Surveys and birding visit to wetlands in this region would enhance current knowledge of many species, including several listed as at-risk in British Columbia.