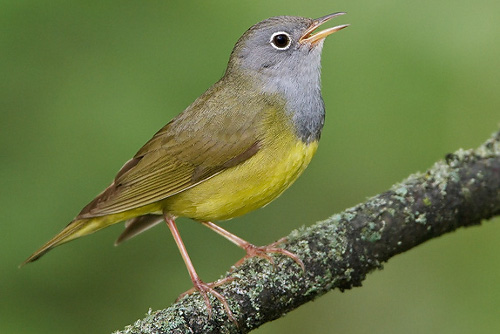 Characteristics and Range One of the least known wood warblers in North America, the uncommon and elusive Connecticut Warbler may be viewed on its breeding territory by following the loud, ringing song of the male. It is one of the last migrants to return to British Columbia in the spring, typically arriving during the last week of May. The Connecticut Warbler breeds in a fairly narrow band of southern Boreal Forest from north of the Great Lakes westward to northeastern British Columbia. It is a long-distance migrant wintering mainly in the Amazon Basin of South America.

Distribution, Abundance, and Habitat Within British Columbia, the Connecticut Warbler is found east of the Rocky Mountains, primarily in the Boreal Plains and Taiga Plains ecoprovinces. This general pattern of distribution is unchanged since The Birds of British Columbia was published in 2001, although the Atlas did note a few records extending farther west, just into the Sub-Boreal Interior Ecoprovince.

Variously described as very rare to fairly common (Campbell et al. 2001, Phinney 1998), this wide range is reflected in the Probability of Observation values for the Boreal White and Black Spruce biogeoclimatic zone where nearly all records occur. In areas where suitable habitat is common, in parts of the Peace and Fort Nelson river lowlands, the bird can be found with relative ease. Elsewhere, it is widely scattered and difficult to find. It is most common in the Boreal Plains Ecoprovince.

In British Columbia, the Connecticut Warbler is found most often in stands of Trembling Aspen (Populus tremuloides). Scattered White Spruce (Picea glauca) or Balsam Poplar (Populus balsamifera) may occasionally be present. Occupied stands may vary in age and stem density, but most sites have a lush herbaceous layer that includes grass, and a sparse, tall shrub layer (Preston et al. 2007). Sites with alder (Alnus) species in the understory are generally avoided (Schwarz 2007). This preference for upland aspen habitat is consistent across the western parts of the Connecticut Warbler's range, but differs significantly from habitat used farther east, where the species is found in lowland spruce (Picea) bogs, and pine (Pinus) barrens (Pitocchelli et al 2102).

Conservation and Recommendations The Connecticut Warbler is Blue-listed in British Columbia and is also listed as a Species at Risk under the British Columbia Forest and Range Practices Act. Under the latter several protected Wildlife Habitat Areas have been established for the species in the Dawson Creek Timber Supply Area. The provincial ranking was reassessed favourably, from imperiled to special concern, as a result of new information from the Atlas (British Columbia Ministry of Environment 2015). However, available habitat is declining as mature aspen stands are harvested for forest products or cleared for industrial and agricultural development. Current habitat models are ineffective at predicting distribution of Connecticut Warblers in British Columbia because key understory information is lacking from forest cover and vegetation inventories (Preston et al. 2007). Occupied stands in British Columbia naturally regenerate after wildfire, and the species is found in greater density in post-fire than post-harvest stands in Alberta (Hobson and Schieck 1999). It remains unclear whether stands that regenerate after timber harvesting techniques (which attempt to mimic natural disturbance events) will provide suitable habitat for species that use fire-origin stands.