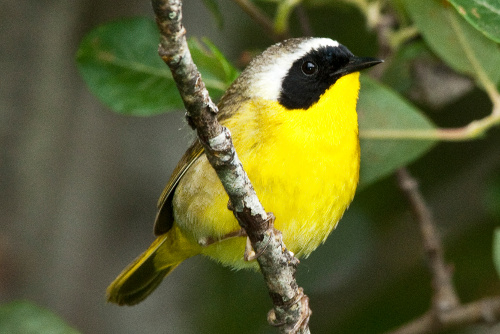 Characteristics and Range The Common Yellowthroat is a fine candidate for a "spark" bird - the bird that first makes someone take up bird watching. The male's musical "witchety witchety witchety" song invites a closer look, which with patience can be rewarded by views of its stunning, bandit-masked head over a bright yellow breast and belly. The bird continues to enchant experienced observers, being one of the earlier returning migrants, brightening up spring walks along roadsides and ditches almost anywhere. The Common Yellowthroat is one of the most widely distributed North American warblers, breeding across much of the continent south of the tree line, and migrating medium distances to winter mainly in the Caribbean, Mexico and Central America (Guzy and Ritchison 1999).

During the Atlas, Probability of Observation modelling showed that it was most likely to be found in low- to mid-elevation areas that supported higher densities of wetlands. Atlas point count data showed that ecoprovinces supporting centres of abundance matched the areas with highest Pobs values: the lowlands, valley floor and plateau systems (below 750 m) of the Taiga Plains (especially the Fort Nelson river lowlands), Southern Interior Mountains, Central Interior and Sub-Boreal Interior, and Georgia Depression ecoprovinces. This expands on Campbell et al. (2001), which considered the species to be most numerous in the Southern Interior Mountains and Georgia Depression ecoprovinces, based on the available data.

Common Yellowthroats are primarily birds of wet or damp areas. They are ground-nesters requiring low, dense vegetation for breeding, such as marshes, grasses, and low shrubs, especially on the edge of open wetland and agricultural habitats. They also breed, but are less common, in drier areas, e.g., the undergrowth of Trembling Aspen (Populus tremuloides). These finer scale habitat features are more important factors than broad climate-vegetation types in explaining the distribution and abundance of the bird.

Conservation and Recommendations The Canadian and British Columbia Common Yellowthroat populations have shown little change based on long-term Breeding Bird Survey trend data (Environment Canada 2011), and there are no major conservation issues for the species. The province of British Columbia has a high global responsibility for Common Yellowthroat conservation. Adoption of Wetland Stewardship Partnership (2010) recommendations will help alleviate the impacts of local reductions in wetland quality and quantity due to urban development and agriculture.