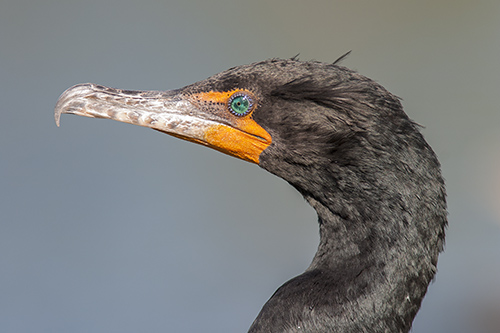 Characteristics and Range The Double-crested Cormorant is a large, conspicuous and gregarious waterbird that forms breeding colonies along both Pacific and Atlantic coasts of North America, and in freshwater wetlands from the Great Lakes to the Great Plains and Great Basin. It winters along North American coasts and in the United States' Southern Coastal Plains (Dorr et al. 2014). Two subspecies likely occur in British Columbia (Dorst and Mougin 1979, Watson et al. 1991), P. a. albociliatus along the coast and possibly P. a. auritus in the interior (Dorr et al. 2014). The location of P. a. albociliatus colonies is quite fluid within its southern British Columbia to Baja California and inland range (Anderson et al. 2004).

Distribution, Abundance, and Habitat Ten coastal colonies were recorded during the Atlas, all in the Salish Sea of the Georgia Depression Ecoprovince (Carter et al. 2018). The 2009 summary by Carter et al. (2018) showed that the largest colony was on Mandarte Island (131 pairs). Crofton Crane had 89 pairs and the Crofton Dolphins had 70 pairs. Nesting was also recorded on Gabriola Island Cliffs (95 pairs) and nearby (51 pairs), Mitlenatch Island (20 pairs), Christie Island (4 pairs), and by Vancouver's Iron Workers Memorial Bridge (63 pairs). Changing occupation of nest sites since records began in 1959 is a feature of Double-crested Cormorant breeding biology: the change is most apparent on Mandarte Island where pairs have fluctuated between 137 and 1100 pairs between 1983 and 2009 (Carter et al. 2018).

Conservation and Recommendations Anderson et al. (2004) recommend that the coastal subspecies P. a. albociliatus be managed separately from other Double-crested Cormorants. They suggest that the coastal subspecies relocates colonies in response to local food supplies. Another factor might be disturbance and predatory attacks from Bald Eagles (Sullivan 1998, Van Damme and Colonel 2007). Maintaining and monitoring known suitable nesting sites to account for the propensity to relocate would allow for, and improve understanding of population mobility.