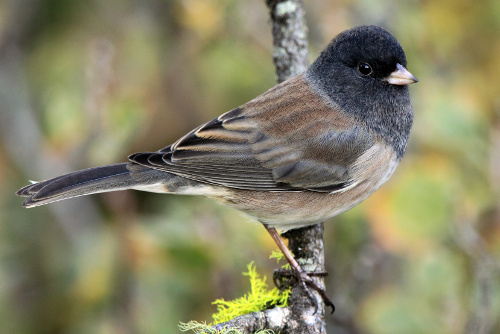 Characteristics and Range This dark-headed sparrow with the white outer tail feathers is the most abundant sparrow in the province - and indeed in the country. It is a familiar winter bird in southern British Columbia, common in parks and around feeders, but in the breeding season it retreats to forested habitats. The breeding range of the Dark-eyed Junco extends from Pacific to Atlantic coasts mainly in the Boreal Forest, and southward into the montane forests and parklands of the western cordillera and Appalachian Mountains. Dark-eyed Juncos winter in the southern two-thirds of North America, generally south of or downslope from the major forested regions (Nolan et al. 2002). Two subspecies groups of Dark-eyed Junco breed in British Columbia: the widespread, browner "Oregon" Junco (J. h. oreganus, J. h. montanus and J. h. shufeldti), and the greyer "Slate-colored" Junco (J. h. hyemalis and J. h. cismontanus). The latter is typical of northern and eastern Canada and replaces Oregon Junco in regions north of 56°N and east of the Rocky Mountains (Campbell et al. 2001).

Distribution, Abundance, and Habitat Both The Birds of British Columbia and the Atlas show that juncos are widely distributed across the province in summer. Gaps in the distribution and the generally decreasing density of records from south to north likely reflect survey coverage, plus a minor but expanding component of treeless terrain.

The great extent of very high Probability of Observation values for all ecoprovinces shows that this species is readily found in all but a few small parts of the province. Abundance data from point counts suggest that the greatest numbers occur in the Sub-boreal Interior, Central Interior, and Northern Boreal Mountains ecoprovinces. Campbell et al. (2001) reported the greatest numbers of this species in the Southern Interior Ecoprovince. This change in status is likely the result of the more standardized approach used for Atlas mapping, rather than a real shift in the centres of abundance of this bird.

The Dark-eyed Junco becomes increasingly abundant at higher elevations, being most common between 1,750 and 2,250 m, a range that brackets the subalpine zone and tree line across much of the province. It is also common at lower elevations in Coastal Douglas-fir, but abundance is highest in the Sub-boreal Pine-Spruce, Sub-boreal Spruce and Spruce-Willow-Birch biogeoclimatic zones. Dark-eyed Juncos almost invariably select forest or woodland for nesting. Local preferred habitats range from forest interiors to forest edges, subalpine parkland, clear-cuts, and old burns. Alpine meadows are used for foraging. In subalpine and alpine habitats in the interior, juncos have evolved several elevation-specific adaptations (Bears et al. 2009). The Dark-eyed Junco nests on the ground, selecting sites where protection is provided by dense or overhanging vegetation, tree roots, fallen trees or shallow cavities.

Conservation and Recommendations Breeding Bird Survey data show that Dark-eyed Junco populations are stable, and population estimates rate the species as one of the most numerous in North America. The province of British Columbia has a moderate responsibility for the species globally, reflecting how abundant and widespread it is here. Junco populations can be affected locally by forest-management practices and wildfire.