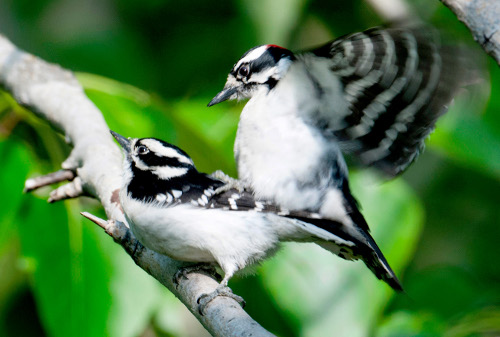 Characteristics and Range The Downy Woodpecker is the smallest North American woodpecker and is a welcome sight at winter suet feeders. It is a year-round resident throughout most wooded regions of North America, from the northern treeline to the southern United States (Jackson and Ouellet 2002). Although similar in appearance to the Hairy Woodpecker, the two species are not closely related; their similar plumages are likely the result of convergent evolution (Weibel and Moore 2005).

Distribution, Abundance, and Habitat The Downy Woodpecker breeds throughout most of British Columbia, but is very sparsely distributed across the far north and northern coast. It has been rarely observed on Haida Gwaii (Campbell et al. 1990) and the Atlas made no observations there. Campbell et al. (1990) noted that the Downy Woodpecker bred throughout most of southern British Columbia, and was very rare farther north, where breeding was confirmed only six times. The Atlas greatly expanded the breeding season distribution in central-northern parts of the province, likely due to increased survey effort. Breeding was mostly between sea level and about 1,250 m.

The most extensive areas of higher Probability of Observation were in valley systems and lower elevation areas of the Georgia Depression, Southern Interior and Southern Interior Mountains ecoprovinces. However, the moderate samples available from point counts suggested that abundance did not vary appreciably with elevation, and at the ecoprovince scale, abundance was similar almost everywhere except the Boreal Plains, where the bird was less common. High Pobs values in the Coastal Douglas-fir, Ponderosa Pine and Bunchgrass biogeoclimatic zones were not mirrored by higher abundance on point counts, which suggested that the species was similarly common in a wide variety of lower elevation biogeoclimatic zones.

Conservation and Recommendations Although there has been a moderate increase in population across Canada since about 1970, the most recent decade shows a large decrease (Environment Canada 2011), including in British Columbia (Environment Canada 2014). This is in contrast to the Hairy Woodpecker which is showing a large increase in abundance in British Columbia. There appear to be few threats to the still-common and adaptable Downy Woodpecker.