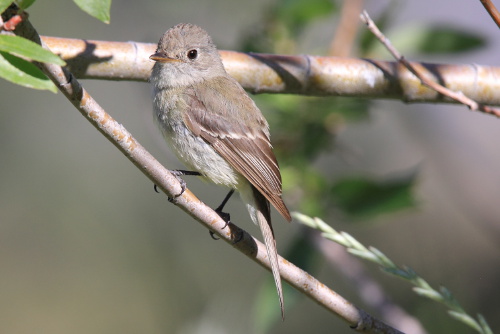 Characteristics and Range The sharp notes of the Dusky Flycatcher's song are one of the characteristic bird sounds of the dry valleys of the southern British Columbian interior. Its global breeding range extends across montane western North America, mainly from the Rocky Mountains west, and from southern Yukon to northernmost Baja California. It is a short- to medium-distance migrant to the winter range in Mexico, southern Arizona and New Mexico.

Distribution, Abundance, and Habitat This species occurs throughout most of the interior of the province, although it is much less widespread in the northern third of British Columbia and east of the Rocky Mountains. West of the Coast and Cascade mountains, it only occurs along the largest river valleys, and has only been confirmed to breed once, prior to the Atlas. The Atlas maps many more records in the Sub-Boreal Interior and Northern Boreal Mountains than were known when The Birds of British Columbia was published in 1997. It is not clear if this is simply a result of more comprehensive coverage, or an actual range expansion.

The Probability of Observation for Dusky Flycatcher is highest and most extensive on the mid-elevation plateaus in the Central Interior and Sub-Boreal Interior ecoprovinces. Highest abundance on point counts is also in these ecoprovinces, plus the Southern Interior, and locally in the Northern Boreal Mountains, and between 750 and 1,250 m altitude. Campbell et al. (1997) considered the Southern Interior Ecoprovince to support the highest numbers.

The Dusky Flycatcher occupies a wide variety of forested habitats but generally avoids cool coniferous forest with a closed canopy (including most coastal and subalpine forests). It is common in the open Douglas-fir (Pseudotsuga menziesii) and Ponderosa Pine (Pinus ponderosa) forests of the southern interior; it is also common in Trembling Aspen (Populus tremuloides) stands and areas where aspens are intermixed with conifers. This is reflected in the higher abundances in Interior Douglas-fir, Sub-Boreal Spruce and Sub-Boreal Pine-Spruce biogeoclimatic zones. It will also use shrubby burned or logged areas with only scattered trees. In far northern British Columbia the southern Yukon, it breeds in very open forest close to the timberline (Sinclair et al. 2003), a habitat which it avoids across most of its range. A requirement is tall deciduous shrubs or small trees such as willows (Salix species) or Saskatoon (Amelanchier alnifolia), in which it makes nests. Campbell et al. (1997) found that 95% of nests in British Columbia were in deciduous shrubs and small trees.

Conservation and Recommendations No conservation concerns have been expressed about the Dusky Flycatcher. There may be a slight long-term declining trend in British Columbia, based on Breeding Bird Survey data, but at the continental level, the population is apparently stable (Sauer et al. 2014).