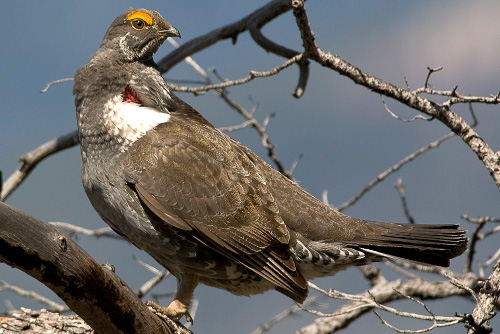 Characteristics and Range The Dusky Grouse was formerly considered conspecific with the Sooty Grouse, the two taxa together forming the Blue Grouse (Dendragapus obscurus). Mitochondrial DNA analyses, combined with behavioural and habitat differences indicate they are best treated as separate species (Barrowclough et al. 2004). They are very similar in appearance, but Dusky tends to be lighter and more greyish compared to Sooty, with displaying males showing a deep red neck sac and all-black tail feathers. The Dusky Grouse occurs immediately east of the range of the Sooty Grouse, in interior mountains, plateaus, and basins of western North America, from central Yukon to hill ranges south of the Rocky Mountains (Zwickell and Bendell 2005).

Distribution, Abundance, and Habitat The Dusky Grouse is relatively widespread in southern interior British Columbia but more sparsely distributed farther north. The western limit of its distribution narrowly overlaps with that of Sooty Grouse along the eastern downslopes of the southern Coast Mountains and along upper reaches of large rivers like the Skeena that penetrate the coastal mountain ranges farther north.

The Probability of Observation model shows that it is not an easy bird to find anywhere. It is probably under-recorded, since the deep, low hooting call of the male Dusky Grouse is very difficult to hear, and usually delivered in early spring. The centre of breeding appears unchanged since The Birds of British Columbia was published in 1990: south of 52°N in the Southern Interior Ecoprovince including the Chilcotin Plateau, and secondarily the Southern Interior Mountains Ecoprovince, mainly in the Interior Douglas-fir and Engelmann Spruce-Subalpine Fir biogeoclimatic zones. Dusky Grouse breeds at higher elevations than Sooty Grouse, with many observations in the 1,500-2,250 m range, although breeding from 500-1,250 m is not uncommon.

Dusky Grouse use a variety of coniferous forest habitats and even sagebrush (Artemisia species) grasslands for breeding. Nests are placed in small depressions on the ground, and lined with dry vegetation. As in all grouse, young leave the nest very soon after hatching to forage in family groups with the female.

Conservation and Recommendations The conservation status of Dusky Grouse in British Columbia is not clear, but British Columbia's global responsibility for the species is high. Breeding Bird Survey data suggest a possible decline in the Great Basin (Environment Canada 2014), but are insufficient to produce a meaningful trend. Like all grouse in North America, the Dusky Grouse is a popular gamebird, and is hunted across its range in British Columbia, although hunting appears to present little threat to the persistence of the species (Zwickell and Bendell 2005). As with the Sooty Grouse, further study would improve our understanding of the provincial population, not least because their recent split means species-specific data are lacking.