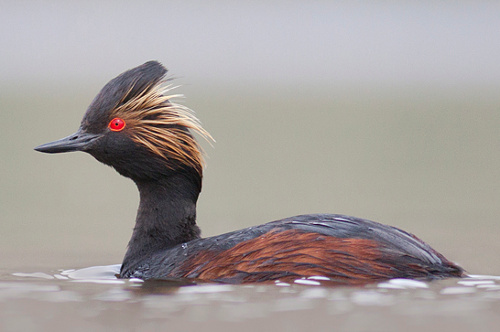 Characteristics and Range This small grebe is a familiar summer visitor and colonial breeder in shallow lakes and ponds of British Columbia's south-central interior. It is the most abundant grebe in North America and indeed the world, and its distinctive, crested head in breeding plumage allows for easy identification. The North American breeding distribution occupies the Rocky Mountain and Great Plains regions and, locally, the Mexican Sierra Madre. Major wintering areas are in the Gulf of California, the Salton Sea, and Baja California. Outside North America, two subspecies breed widely from Europe south and east across Asia and Africa. The Eared Grebe is unique among birds in spending up to 10 months of the year flightless, and going through multiple changes in body mass of about 100% through the course of each year. It is closely associated with highly saline environments, and immediately after breeding, most of the North American population congregates on either Mono Lake, California, or Great Salt Lake, Utah, to feed on the abundant brine shrimp and alkali flies at those sites (Cullen et al. 1999).

Distribution, Abundance, and Habitat Breeding of the Eared Grebe in British Columbia is very patchy, and mainly restricted to valleys, basins and upland plateau landscapes of the Central, Southern Interior and Boreal Plains Ecoprovinces, and the southernmost part of the Rocky Mountain Trench. Possible nesting was also recorded during the Atlas in the Fort Nelson River lowlands. This range is much as was known when The Birds of British Columbia was published in 1990, but the Atlas did not confirm breeding in the South Okanagan or the West Kootenay (Campbell et al. 1990). The general distribution coincided with warmer, drier portions of the province where high rates of evapotranspiration produce the saline wetlands preferred by Eared Grebes. The low number of observations in the Southern Interior Ecoprovince may represent insufficient observer coverage of previous colony locations, or actual declines.

The maximum Probability of Observation is in the Chilcotin-Cariboo Basin and on the Cariboo Plateau in the Central Interior Ecoprovince, where the Pobs model indicates Eared Grebes are three times more likely to be found compared to the next most likely area, the Peace River lowlands of the Boreal Plains Ecoprovince. Most colonies are small, numbering <30 adults, but one colony of 100 adults was recorded in the Chilcotin, and the largest, containing 400 adults, was in the Peace River lowlands. Largest colonies occur in the 400-675 m elevation range.

Preferred habitats include shallow, freshwater marshes, ponds and lakes with emergent vegetation and an abundance of macroinvertebrates. Ponds with higher pH and phosphorous levels are preferred in some areas of central British Columbia (Savard et al. 1994). Nests are often placed within emergent vegetation (Campbell et al. 1990).

Conservation and Recommendations The Eared Grebe was moved to the British Columbia Blue List in 2015 because of concern over declining populations. Maintenance of a variety of suitable wetlands in the general area of known colonies is important to allow colony movements to occur when conditions dictate. More research to understand colony fluctuations and movements is a priority.