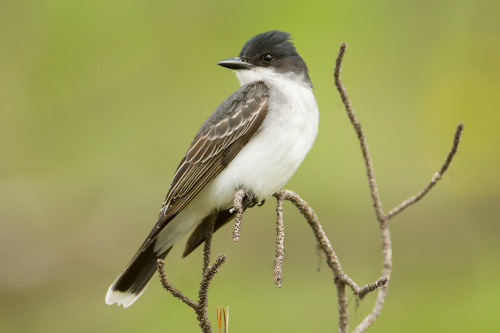 Characteristics and Range Noticeable as it hawks for insects, no other North American flycatcher is entirely blackish-gray above and white below. The Eastern Kingbird has the most extensive breeding range of all North American flycatchers, from the Pacific Northwest east to the Atlantic and Caribbean coasts (Murphy 1996). A neotropical, long-distance migrant, this species leaves behind its aggressive "tyrant" nesting behaviour and winters in South America, primarily in Amazonia, where it feeds on berries in large, social flocks.

Distribution, Abundance, and Habitat Atlas results showed that the Eastern Kingbird bred quite widely in the southern and central interior of British Columbia, particularly in the Okanagan and Thompson-Nicola regions, with clusters on the Cariboo and Fraser Plateaus and along the Southern Rocky Mountain Trench. There was also a population cluster in the Peace and Fort Nelson river lowlands. The Atlas distribution was similar to that when The Birds of British Columbia was published, but the Atlas confirmed breeding in the upper Skeena River drainage, farther northwest than was previously known, and failed to record any breeding on Vancouver Island.

Conservation and Recommendations There has been a significant decrease in Canadian populations since 1970 (Environment Canada 2011) but this is not reflected in British Columbia (Environment Canada 2014). Habitat loss and degradation due to urbanization, intensive agriculture, and forest regeneration are likely contributing to the current decline in Eastern Kingbird populations (Murphy 1996).