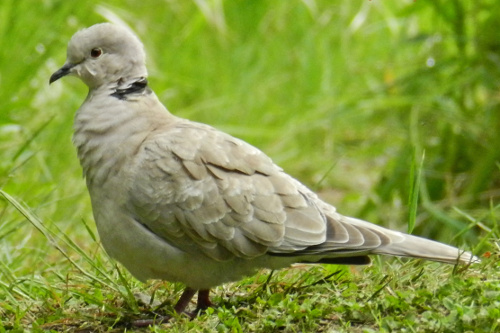 Characteristics and Range The repetitive and sometimes incessant cooing of the Eurasian Collared-Dove is rapidly becoming a familiar sound to the North American public. Its native range may once have been restricted to South Asia, but by natural dispersal and/or human introduction, the species expanded dramatically across Europe and Asia through the 1900s. In North America, Eurasian Collared-Doves were first released in the mid-1970s on the Bahamas, since when the species has quickly spread across most of the southern and central part of the continent (Romagosa 2012). It has now colonised or occurred in all Canadian provinces and territories, and coastal Alaska, invariably associated with human habitation. It is largely resident across its native and introduced range, but is capable of short- to medium-distance dispersal.

Distribution, Abundance, and Habitat At the start of the Atlas in 2008, there was a well-established population in the Similkameen Valley (perhaps present since the early 1980s), numerous scattered records in the southern interior and along the coast north to Haida Gwaii, and odd records in the interior farther north (Syroteuk 2008). By 2012, records were truly widespread across central and southern British Columbia, with breeding confirmed as far north as Stuart Lake, and probable breeding recorded as far north as Atlin Lake and the Liard River. Breeding commences in February and continues into at least October in the Fraser River delta. Such a wide breeding window for a multi-brooded bird may partly explain its rapid range expansion.

Probability of Observation modelling shows only a low to moderate likelihood of encountering the species, primarily in lower elevation areas of the Georgia Depression and Southern Interior ecoprovinces. Atlas point counts show that local abundance also peaks in these areas.

Atlas records come from a wide variety of habitats, but most if not all records are associated with human habitation: small settlements on remote coastal inlets, villages and suburban areas, and even city centres where sufficient tall trees provide roosting and nesting sites. The prolific expansion of the Eurasian Collared-Dove in North America is most strongly associated with suburban development, and secondarily agricultural areas (Bonter et al. 2010).

Conservation and Recommendations The Eurasian Collared-Dove is among the most successful alien-invasive vertebrate species. Its impact on native species requires further investigation, but it has been suggested that the Eurasian Collared-Dove exerts foraging dominance over the native Mourning Dove in habitats where they overlap (Poling and Hayslette 2006). It shares parasites with Mourning Doves and other species, and can carry viruses and infections that can cause mortality in native species (Bean et al. 2005, Beckett et al. 2007). As an alien species, it has no provincial conservation status designation; it is hunted in some U.S. states, which may reduce or regulate local populations in rural areas.