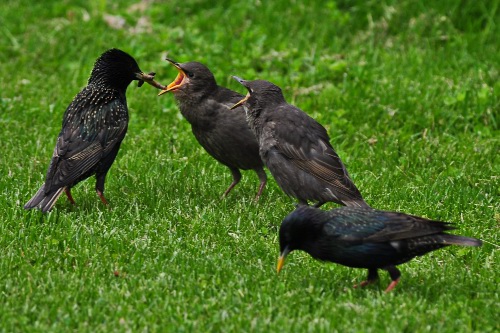 Characteristics and Range The introduction of the European Starling to North America is one of the most dramatic examples of the translocation of an alien bird species anywhere in the world. Native to Europe and Asia, about 100 birds were released into New York's Central Park in 1890 and 1891. Within a century it had become one of the commonest and most widespread species on the continent, occurring from the Boreal Forest to Mexico, with a population estimated to number more than 200 million birds (Cabe 1993). It arrived in British Columbia around 1945. It is a very charismatic bird, an exceptional ventriloquist capable of mimicking many bird and man-made sounds, and forms dense flocks that twist and turn in flight with mesmerising synchrony, in order to reduce predation risk. It is also a crop pest responsible for an estimated $800 million of damage annually (Pimentel et al. 2000). It has also been introduced to Australia, New Zealand and South Africa.

Distribution, Abundance, and Habitat In British Columbia the European Starling is largely associated with human settlements, so is most widespread in southern, central and northeastern regions. It occupies a similar provincial range now to when The Birds of British Columbia was published in 1997, with some subtle differences: the Atlas shows more extensive clusters of breeding on northern Vancouver Island, around Prince George and the Peace River lowlands, and less widespread records through much of the Southern Interior Mountains Ecoprovince.

The main centre of abundance is in the lower Fraser Valley and adjacent areas of the Georgia Depression Ecoprovince, as noted by Campbell et al. (1997). It is also common in the valley systems of the Southern Interior Ecoprovince, and more locally in the southern Coast and Mountains Ecoprovince. Highest abundance occurs at the lowest elevations.

Conservation and Recommendations After a period of prolific increase, the long-term trajectory of European Starling populations across Canada and in British Columbia is now declining (Environment Canada 2011). This invasive alien species is of conservation concern for the potential impacts it has on native species. The European Starling outcompetes many native cavity nesters, but most evidence suggests that it does not exert a major effect, especially in areas where nest cavities are not limiting (Koch et al. 2012). It is considered a nuisance in locations where large roosts deposit heavy fecal loads and substantial noise, and is a major agricultural pest in orchard and vineyard regions of the southern interior and Fraser River delta. Ongoing eradication in the Okanagan Valley requires improved science to be effective (Neuhauser 2013). Best practices for farmers to minimise the impacts of starlings are available (Holm and Kirk 2013).