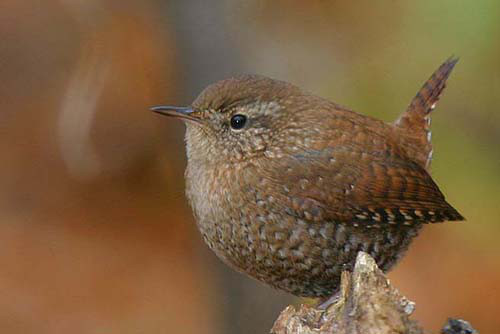 Characteristics and Range A secretive species of dense woods, this small bird is more likely heard than seen, with its loud complicated songs and "kimp kimp" call notes. It is found breeding in the boreal coniferous and hardwood forest belt from northeastern British Columbia to the Atlantic Coast of Canada and the northeastern United States, and south through the Appalachian Mountains, and migrates short distances to winter across the southeastern quarter of North America. The Pacific Wren was recently split from this species and it is the Pacific Wren that is found across all of British Columbia except the northeast (Toews and Irwin 2008, 2012).

Distribution, Abundance, and Habitat In British Columbia, the Winter Wren is found in the Taiga and Boreal Plains ecoprovinces and in the eastern foothills of the Rocky Mountains in the easternmost portion of the Sub-Boreal Interior Ecoprovince. Whilst the Atlas confirms breeding in only one 10-km square in the Peace River drainage, the species is likely breeding in forested habitats over much of this range. In the field Winter Wren is not easily separated from Pacific Wren; where there is doubt over which of the two species was detected at a given location, those records are omitted from Atlas analyses.

The Probability of Observation model and point count data both show the centre of abundance to be below 500 m elevation in the Fort Nelson River floodplain of the Taiga Plains Ecoprovince. Campbell et al. (1997), while not dealing with the Winter Wren as a species separate from the Pacific Wren, regarded the species as only casual in the Taiga Plains Ecoprovince. Atlas work shows the species to be more abundant here than was previously known.

Conservation and Recommendations The Winter Wren was moved from the Yellow List (not at risk) to the Blue List (Vulnerable) by the British Columbia Conservation Data Centre in 2015. Guidelines for forest operations for Pacific Wren have been developed (Altman 1999, 2005) and should be evaluated for use for Winter Wren in northeast British Columbia. The range of this species and its overlap with Pacific Wren is still not clearly understood, so birders can provide valuable information by carefully noting which species they see or hear and documenting their observations in available databases (e.g., eBird).