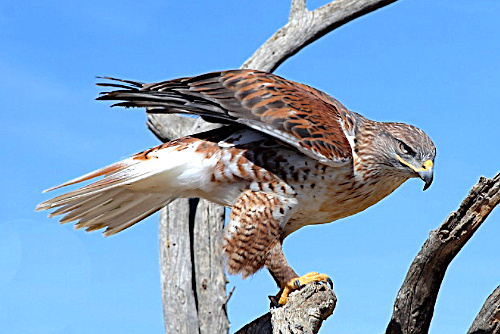 Characteristics and Range The Ferruginous Hawk breeds in the open grassland prairie, shrub steppe, and desert regions of western North America, and winters in the arid southwest into northern Mexico's Sierra Madre. This powerful and regal Buteo is the largest North American hawk. Its large size, broad wings, colourful plumage of white underparts and rufous back and legs, and its distinct, dihedral flying pattern, should make it stand out to any observer. In British Columbia it is a very rare summer visitor. Most birds are postulated to be migrant overshoots from the Great Basin population or from the Prairies (Toochin 2014). Of its primary prey, jackrabbit (Lepus), prairie dog (Cynomys), and ground squirrel (Spermophilus) species (Bechard and Schmutz 1995), only the ground squirrels are found in British Columbia. The lack of a prey base and the rarity of open grassland habitat in British Columbia suggest that the province does not provide much suitable habitat for breeding Ferruginous Hawks.

Distribution, Abundance, and Habitat Historically in British Columbia, the Ferruginous Hawk was a very rare breeder on the Thompson Plateau in the Southern Interior Ecoprovince, where it has only been confirmed to breed twice (Campbell et al. 1990; Toochin 2014). The only Atlas record came from the west side of the Thompson Plateau in 2010. There were other sightings during the Atlas data collection years (2008-2012), but most were outside of the breeding period (Toochin 2014). In 2013, one or two birds were observed near the 2010 Atlas observation location (Baines 2013).

It most often nests in trees and shrubs, and also cliffs, utility structures, and rocky outcrops (Bechard and Schmutz 1995). This hawk also nests in artificial, purpose-built nest structures erected throughout its present and former range in an effort to increase reproductive success.

Conservation and Recommendations The Ferruginous Hawk is considered a vagrant in British Columbia. It is a native grassland specialist, so the loss of that habitat through changing agricultural practices and, to a lesser extent, urbanization, has resulted in a large decrease in Ferruginous Hawk populations across the Prairies, with almost 50% of its historical range lost in the Canadian Prairies (COSEWIC 2008). Climate change projections (e.g., Hamann and Wang 2006) suggest an increasing trend for potentially suitable grassland habitat in southern British Columbia. Sightings in or near grasslands should be investigated for possible breeders, and any occurrence or breeding evidence should be submitted to relevant monitoring and species at risk data repositories like eBird and the British Columbia Conservation Data Centre.