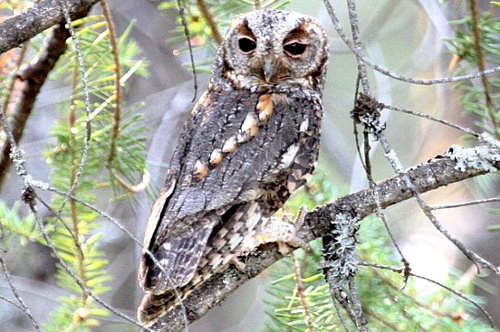 Characteristics and Range The Flammulated Owl is a tiny, insectivorous owl found in drier montane coniferous forests from southern British Columbia south through the mountains of western North America to Nicaragua. Its small size, cryptic coloration, and soft, ventriloqual "boo-boot" calls make it difficult to detect, and much of what we know about its biology has been elucidated only in the last 25 years. It is highly migratory over most of its breeding range, wintering in the pine forests of Mexico and Central America.

Distribution, Abundance, and Habitat Flammulated Owls breed in mid-elevation forests in the drier valleys of the Southern Interior, Central Interior, and Southern Interior Mountains ecoprovinces. Within those regions they are usually found in the Interior Douglas-fir biogeoclimatic zone, with scattered reports from localized appropriate habitat in the Ponderosa Pine, Bunchgrass, and Interior Cedar-Hemlock zones. In British Columbia, Flammulated Owls are generally found at elevations between 500 and 1,000 m. The distribution mapped by the Atlas adds to the range reported in The Birds of British Columbia published in 1990, particularly in the dry forests along the Fraser River and adjacent valleys in the eastern flanks of the Coast Mountains, but this represents increased effort rather than an actual range extension.

Atlas data do not provide enough information for population estimates, meaningful Probability of Observation figures, or abundance in various regions; the British Columbia population has been estimated at 1,200-2,000 breeding birds (COSEWIC 2010).

Throughout its range, the species is found in drier coniferous and mixed forests characterized by Douglas-fir (Pseudotsuga menziesii), Ponderosa Pine (Pinus ponderosa), Trembling Aspen (Populus tremuloides) and oaks (Quercus species) (Linkhart and Mccallum 2013); habitat use in British Columbia is similar but without the emphasis on aspen or oak. It rarely uses pure pine forests in British Columbia, preferring older, open Douglas-fir forests with scattered veteran Ponderosa Pines (COSEWIC 2010). The Flammulated Owl nests in tree cavities excavated by woodpeckers, particularly those made by Northern Flickers, but it readily uses artificial nest boxes as well.

Conservation and Recommendations The Flammulated Owl is strongly associated with older forests because of its requirement for woodpecker cavities in large dead or dying trees for nesting, and forest openings for foraging. There are concerns that forest harvest, pine beetle epidemics and catastrophic forest fires have all negatively impacted habitat quality for this species in recent decades, and consequently it is listed as a species of Special Concern in the federal Species at Risk Act, and Blue-listed in British Columbia (COSEWIC 2010). Continued monitoring through nocturnal owl surveys and future Atlas projects will be important to assess the status of this small owl.