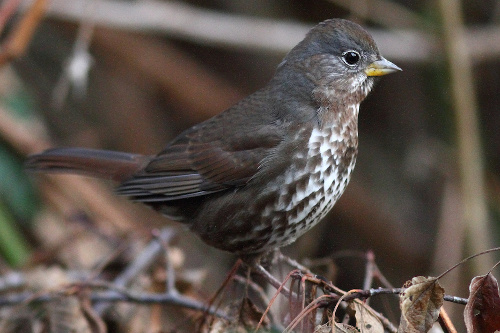 Characteristics and Range The Fox Sparrow rustles through forest floor debris in search of food and calls a distinctive, sharp "chuck" when disturbed. It is one of the first spring songsters on the coast, its melodious, whistled "dee-o-weet-doo" often preceded by a sharp click. It is a dark, chunky sparrow and its yellowish lower mandible separates it from the similar but smaller Song Sparrow in areas where the darker forms of both species overlap. The Fox Sparrow is a short- and medium-distance migrant that breeds across boreal and montane western North America, down to sea level along the Pacific Coast, and winters along Pacific and Atlantic coasts, and to the east and south of the Great Plains (Weckstein et al. 2002). It is one of North America's most variable passerines: eighteen subspecies are recognized, which can be placed into four different groups based on plumage, migratory behavior and song. Three of these groups, consisting of at least ten subspecies, occur in British Columbia (Swarth 1924, Webster 1983, Campbell et al. 2001).

Distribution, Abundance, and Habitat The Fox Sparrow is a widely distributed breeding bird throughout most higher elevation and coastal parts of the province. There has been a distinct increase in the breeding season distribution of Fox Sparrow since the publication of The Birds of British Columbia in 2001, probably because Atlas coverage was more comprehensive. The Coast and Mountains (Haida Gwaii and western Vancouver Island) and the Northern Boreal Mountain ecoprovinces support the highest Probabilities of Observation and abundance, as documented in Campbell et al. (2001). The Fox Sparrow occurs at moderate PObs and abundance in the Southern Interior Mountains and the Sub-Boreal Interior ecoprovinces.

Each of the three subspecies groups occupies different habitat types (Weckstein et al. 2002), which explains the wide range of altitudes and biogeoclimatic zones used by Fox Sparrows in British Columbia. Atlas data indicate that it is most common at higher elevations, especially between 1,750 and 2,250 m, and in the Spruce-Willow-Birch, Coastal Western Hemlock, Engelmann Spruce - Subalpine Fir, and alpine biogeoclimatic zones. In coastal regions it breeds in understory of mature forest, in thickets and brushy woodland edges, and in the interior it prefers damper locations, well-vegetated riparian areas and dense streamside shrubs, at higher elevations choosing subalpine meadows with patches of small trees and shrubs.

Conservation and Recommendations There are no indications that the Fox Sparrow is of conservation concern in British Columbia. However, despite at least ten subspecies occurring here, its shy habits and preference for dense vegetation has made the collection of life history data difficult and many aspects of its ecology remain unknown (Weckstein et al. 2002). In coastal regions it is a bird of forest understory and is susceptible to loss of old-growth forest.