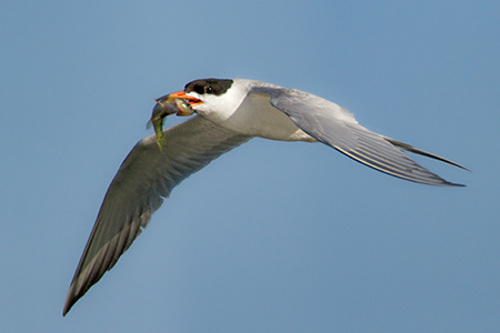 Characteristics and Range Forster's Tern is the smallest and palest of the three white Sterna terns found in British Columbia. It is a short to medium distance migrant, almost entirely restricted to North America for both breeding and wintering.

Distribution, Abundance, and Habitat Forster's Tern is a relatively recent addition to the breeding bird fauna of British Columbia with the first breeding noted in 1980 (Goossen et al. 1982), although it was likely present since 1974 (Campbell et al. 1990). Forster's Tern breeds only in the south-east portion of the province, on two adjacent freshwater bodies, Duck and Leach Lakes in the Kootenay River valley. This population is disjunct from the rest of the breeding population. Non-breeders have been found in summer in southern and northeastern British Columbia. During the Atlas period there was one additional location identified in the upper Columbia River valley with breeding evidence given as "possible". There may be additional undiscovered breeding populations in British Columbia, but if so they are likely remote or small. The single breeding location is consistent with the information on this species in The Birds of British Columbia published in 1990, suggesting that Forster's Tern has undergone little or no change in its British Columbia range over the past 20 years.

There have been up to 12 nesting pairs on the two adjacent lakes, with up to 46 adults present (Campbell et al. 2008). During the Atlas period breeding was not confirmed but considered probable. There was one count of 30 made on June 24, 2008.

Forster's Terns in British Columbia nest on mats of vegetation in marshy, vegetated areas on lake edges, and feed out in open water. This is typical for other breeding locations (McNicholl et al. 2001). Campbell et al. (2008) indicate that colonization of the Duck Lake site is likely due to active management of water levels, which creates suitable habitat. The habitat there is influenced by a system of dykes and pumps that work to manage the wetlands for drought and flood cycles aiming to enhance wildlife production by encouraging emergent vegetation.

Conservation and Recommendations This species is likely dependent on active management of water levels in the Creston Valley to maintain suitable habitat for this nesting. The impact of changes in water management on breeding success and numbers should be monitored.