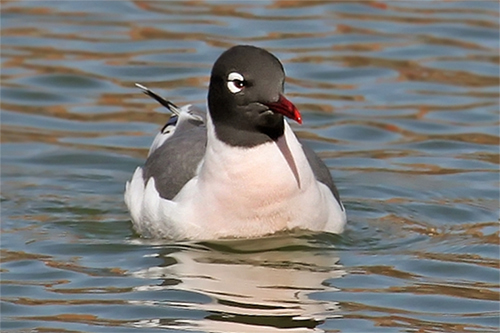 Characteristics and Range The Franklin's Gull is a relatively common visitor to the northern Prairies. Colonies breed in large marshes and numbers can fluctuate dramatically depending on local water conditions. The majority of the breeding range is in Canada, where the population was estimated at more than 500,000 birds in 2007. The Franklin's Gull is one of only two species of North American gull that migrate south of the equator; it winters primarily along the west coast of South America (Burger and Gochfeld 2009).

Distribution, Abundance, and Habitat During the first half of the 20th Century the Franklin's Gull was considered a casual visitor to British Columbia, but numbers increased steadily and by the 1980s it had become common in the northeast (Siddle 2010), especially the Peace River lowlands. This trend was coincident with a general westward range expansion (Burger and Gochfeld 2009). Despite courtship behaviour occurring within apparently suitable habitat, there is no evidence that the species has actually nested in the Peace River area (Phinney 1998), however, Campbell et al. (2001) report a nesting record from Kotcho Lake in the Taiga Plains in 1984. There are Atlas breeding season records from fifteen 10-km squares, all but one in the Peace River region, but no evidence of breeding (all records are coded X, so do not appear on the distribution map). The other record, of two birds, perhaps a pair, is from Mulvaney Lake on the Nechako Plateau.

The Franklin's Gull is known to nest in the Parkland Natural Region of adjacent Alberta (Federation of Alberta Naturalists 2007). The unconfirmed assumption is that birds seen in nearby British Columbia are part of this population. It is not clear whether they are non-breeding wanderers, or breeding birds that commute between nesting sites in Alberta and feeding sites in British Columbia.

The Franklin's Gull uses a variety of habitats in northeastern British Columbia: large, open water lakes, marshes, ploughed fields, parking lots and garbage dumps. Large flocks are often seen circling high in the air, only their distinctive call betraying their presence. Flocks may also be seen at lower altitude, in rapid, direct flight to and from the nesting colonies in adjacent Alberta.

Conservation and Recommendations Although no breeding evidence is documented for the Atlas period, it would be useful to know whether the Taiga Plains nesting site is still active, and to clarify the breeding status of the thousands of birds that visit the Peace River lowlands every year: are they active breeders commuting to and from the Alberta colonies, or simply non-breeding wanderers? Given the species' recent range expansion and the availability of apparently suitable habitat in northeastern British Columbia, the Franklin's Gull may yet become an established breeder in the province.