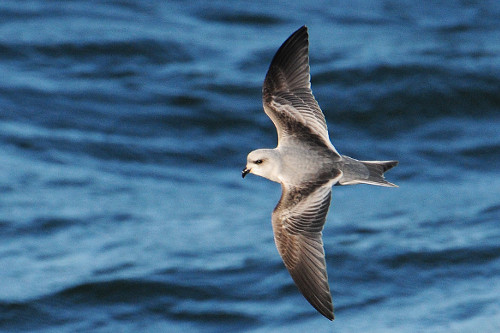 Characteristics and Range The Fork-tailed Storm-Petrel is an abundant "tube-nosed" seabird restricted to the North Pacific Ocean (Dee Boersma and Silva 2001). It breeds from California to the Aleutian Islands, and along the northeast coast of Asia. Approximately 180,000 pairs breed on colonies scattered along the British Columbia coast (Campbell et al. 1990) where they feed on nektonic zooplankton and fish. Outside the breeding season, it disperses southwards across the North Pacific Ocean. The breeding presence of this small, nondescript, grey, burrow-nesting seabird is most often detected by the raspy, or screechy, 3-5 note call it gives while in flight on nocturnal visits to the colony.

Distribution, Abundance, and Habitat Despite the paucity of records reported by Atlas surveyors, the Fork-tailed Storm-Petrel is widely distributed in British Columbia, with breeding colonies scattered along the west coast of Vancouver Island, in the Haida Gwaii archipelago, and in Queen Charlotte Sound and Queen Charlotte Strait (Campbell et al. 1990). Immediately prior to and during the Atlas survey period, at-sea surveys by the Raincoast Conservation Foundation indicated the species remains widespread and common during the breeding season in British Columbia's continental shelf waters (Harvey and Fox 2013).

Locally abundant in British Columbia in summer, the Fork-tailed Storm-Petrel can easily be overlooked on non-targeted surveys because it breeds on remote islands, is active at the colony only at night, and nests in subterranean burrows. There are 13 island groups designated as Important Bird Areas in British Columbia that support breeding colonies of the Fork-tailed Storm-Petrel (IBA Canada 2015); very few were visited during the Atlas period, due to their remoteness.

In British Columbia, the Fork-tailed Storm-Petrel nests both in the open and under the forest canopy on remote islands. Breeding sites are always covered in shrubs or grasses (Campbell et al. 1990). The species can use a natural cavity for nesting, but more commonly digs a burrow, often beneath roots and logs (Vermeer et al. 1988).

Conservation and Recommendations Very little information exists on population size and trends for the Fork-tailed Storm-Petrel in British Columbia, but the main colonies hereare within protected areas. The species is vulnerable to marine contaminants and pollutants including plastic particles, as well as oiling. Introduced predators (chiefly Black Rats Rattus rattus, Norway Rats R. norvegicus and Raccoons Procyon lotor) have greatly reduced some breeding colonies in British Columbia and threaten others (IBA Canada 2015).