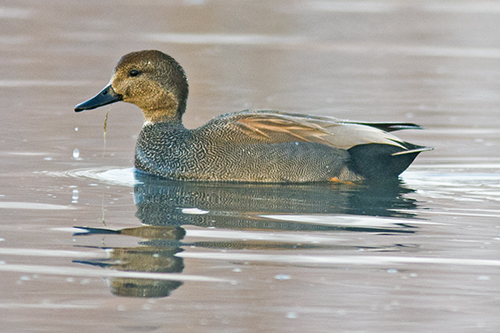 Characteristics and Range This subtly elegant dabbling duck has undergone a more dramatic 20th Century expansion of its global range across North America, Europe and Asia, than almost any other species of waterfowl. In North America, this has occurred through natural expansion and numerous introductions. Here, its core breeding range remains the Prairie Pothole region, from where it migrates south to winter mainly around the Gulf Coast of the United States (Leschack et al. 1997). Breeding now occurs from the Alaska Peninsula and western basins through the Great Lakes to the Atlantic Coast, and wintering occurs across most of southern North America.

Distribution, Abundance, and Habitat Breeding is rather clustered in relatively discrete areas of southern, central and northeast British Columbia: the lower Fraser, Thompson-Nicola and Okanagan, Chilcotin and Peace rivers. The range expansion of the 20th Century noted by Campbell et al. (1990) appears to have continued slowly: breeding now extends to the western Chilcotin Plateau, the Southern Rocky Mountain Trench, and is more extensive in the Peace River lowlands and Central and Southern Interior ecoprovinces.

The Gadwall is not especially numerous as a breeding bird in British Columbia. The Probability of Observation model suggests that the Thompson River and Fraser-Chilcotin river junction areas may be of elevated provincial importance. Breeding occurs between sea level and 1,100 m.

Conservation and Recommendations There are no conservation concerns for the Gadwall. Continued monitoring will help clarify the degree to which it is expanding its range in British Columbia.