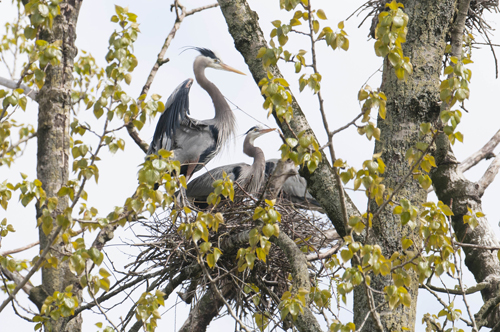 Characteristics and Range The Great Blue Heron ranges across most of North America from southern Canada south into northern Mexico, inhabiting a broad variety of habitats. Herons often wade along seashores and in marshes, lakes, and rivers in search of fish prey, but they also forage in grasslands and farm fields for rodents and other prey (Vennesland and Butler 2011). They typically nest in tall trees, primarily in quiet woodlands, but also sometimes in busy urban areas.

Distribution, Abundance, and Habitat Two subspecies occur, A. h. herodias in the interior and A. h. fannini along the coast (Vennesland and Butler 2011). The coastal subspecies breeds from Puget Sound to southern Alaska (Butler 1997); the interior subspecies is widespread across southern Canada and the northern United States (Vennesland and Butler 2011). Atlas findings for the interior subspecies largely concur with The Birds of British Columbia and Gebauer and Moul (2001), with most herons nesting in the southern third of the province. Probable and possible Atlas nesting records farther north match locations where Campbell et al. (1990) reported herons during the breeding season. Sightings of possible breeding herons in the northeast likely originate from nesting colonies in northern Alberta (Semenchuk 1992).

Atlas results indicate a larger range for the coastal subspecies compared to when The Birds of British Columbia was published. Campbell et al. (1990) reported most nesting in the Georgia Depression Ecoprovince, which is still the case, with a few isolated pairs on the north coast and northern Haida Gwaii. Atlassers filled many gaps in this distribution, including northern Vancouver Island and central and southern Haida Gwaii. This apparent range expansion likely reflects improved coverage by the Atlas.

The average Probability of Observation of the coastal subspecies in the Georgia Depression Ecoprovince was approximately three times higher than in any other ecoprovince. This finding is reflected in the most recent surveys of the coastal subspecies (COSEWIC 2008), which suggested there were about 200 herons on Haida Gwaii, 900 on the mainland coast and 3,600 around the Strait of Georgia and lower Fraser Valley. There are no recent wide-ranging colony surveys in the interior. Gebauer and Moul (2001) estimated 300 to 700 birds at fewer than 50 nesting locations within the three southern ecoprovinces.

In coastal and interior British Columbia, the Great Blue Heron nests mostly in colonies in tall trees; less frequently in small trees and shrubs. A few nest as single pairs, particularly outside the Georgia Depression.

Conservation and Recommendations The Great Blue Heron is an iconic species for wetland conservation programs. The coastal subspecies, listed as Special Concern under the federal Species at Risk Act, appears to be in slow decline (Vennesland and Butler 2011). Breeding herons require foraging areas with an abundance of small fish near forested nesting habitat. Colony locations are dynamic, so in addition to protecting current nesting locations from disturbance, additional forested habitat within 10 km of foraging areas also needs to be available for future nesting. The mapping and protection of current and alternate nesting habitats, stewardship and education programs (e.g., for landowners of colony locations), research on population dynamics and predator ecology, and restoration of highly impacted environments (e.g., deforested farmlands), will be important to facilitate effective management of populations of the coastal subspecies.