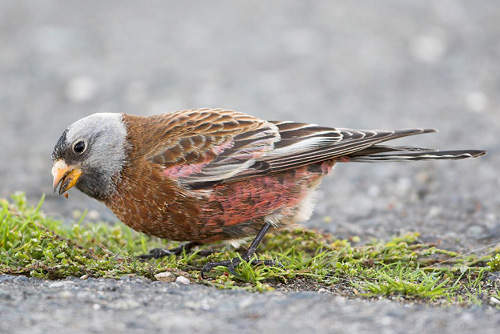 Characteristics and Range This grey, brown and pink finch is one of the few birds encountered in the rocks, snow and ice above treeline. It is possibly the highest-elevation breeding bird in North America. Gray-crowned Rosy-Finch breeds at craggy sites in high mountains with permanent snowfields throughout western North America (Macdougall-Shackleton et al. 2000). A resident and short-distance migrant, it winters in the breeding range but also disperses to lower elevations in mountains.

Distribution, Abundance, and Habitat The Gray-crowned Rosy-Finch is a local breeder in most mountainous regions throughout British Columbia where there are substantial amounts of alpine and rocky habitat. When The Birds of British Columbia was published in 2001, the breeding distribution was poorly known and few nest sites had been found. Generally, the Atlas found the range to be similar to that reported in Campbell et al. (2001), but greatly expanded the breeding season distribution throughout the province; this was likely due to increased effort. For example, the Atlas confirmed breeding at three sites on Vancouver Island where none were documented by Campbell et al. (2001). Most breeding is at 1,000-2,500 m.

Atlas data are limited because of difficulty of gaining access to remote alpine areas during the nesting season. High Probability of Observation and abundance values match the greatest concentration of Atlas observations in the Rocky and Purcell mountains in the Southern Interior Mountains Ecoprovince. The Pobs model also highlighted the Omineca and Skeena mountains in the Northern Boreal Mountains Ecoprovince as an area of potential importance. Too few data were collected to draw firm conclusions on abundance, but elevation use is likely tied to snowline, which rises from the coast to the interior and from north to south (British Columbia Ministry of Forests and Range 2008).

There are no quantitative descriptions of habitat preferences, but generally rocky outcroppings in alpine areas, usually near permanent snow fields or glaciers, are preferred for nesting.

Conservation and Recommendations Information is insufficient for a reliable assessment of changes in breeding abundance since 1970 (Environment Canada 2014), although the Christmas Bird Count data for all three species of rosy-finches combined suggest a large population decline (Environment Canada 2011). The negative effects of climate change on snowfield habitats are the primary conservation concern because of this species' dependence on permanent snow fields for summer foraging habitat.