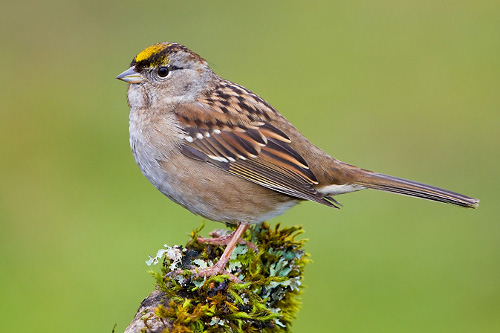 Characteristics and Range This fairly large sparrow with its distinctive black-and-yellow crown and plaintive song was known to the Klondike miners as 'Weary Willy' due to its tendency to sing "I'm so tired" (Norment et al. 1998). It is also distinguished by its limited range, being endemic to far-western North America, and breeding only in the mountains of Alaska and western Canada. It winters along a narrow coastal belt from southern British Columbia to Baja California.

Distribution, Abundance, and Habitat Both the Atlas and The Birds of British Columbia show records for Golden-crowned Sparrow that are scattered sparsely across much of the provincial interior in a pattern that reflects nesting in the high mountains, particularly the eastern side of the Coast Mountains (within the Central Interior and Southern Interior ecoprovinces), the Rocky Mountains north of 51°N, and the Northern Boreal Mountains Ecoprovince. Campbell et al. (2001) attributed the scarcity of records to the remoteness of this bird's subalpine breeding grounds, and it is likely that Atlas records are similarly limited.

Probability of Observation values indicate that this species is most readily seen at high elevations within the major mountain belts, and is especially likely to be found in more northerly regions. Campbell et al. (2001) reported the highest numbers of this sparrow from the Northern Boreal Mountains Ecoprovince, which is also where Atlas point counts show it to be most common and the source of 60% of the Atlas records. Golden-crowned Sparrow is most abundant at elevations that encompass the forest-alpine tundra transition (1,250 - 2,000 m). This 750 m range reflects both local (e.g., due to aspect and snow depth) and general (climate-controlled west to east rise and south to north decline) variations in treeline elevation.

The Golden-crowned Sparrow nests near timberline in subalpine parkland, alpine meadows, forest margins and avalanche chutes. It is most abundant within Spruce-Willow-Birch, but also present in the Engelmann Spruce-Subalpine Fir and Boreal Altai Fescue Alpine biogeoclimatic zones, which collectively provide 85% of Atlas records. Nests are constructed on the ground under dense cover, such as krumholtz; if snow lingers, they are built in woody vegetation just above the snow surface. Thickets of low shrubs (deciduous scrub) and dwarf conifers with grassy openings and water (streams, ponds) nearby are preferred.

Conservation and Recommendations Data are sparse for this species, but available information indicates no conservation concerns: Christmas Bird Count data show a long-term increase, and its dependence on habitats spanning the treeline make this species relatively resilient to the long term effects of climate change.