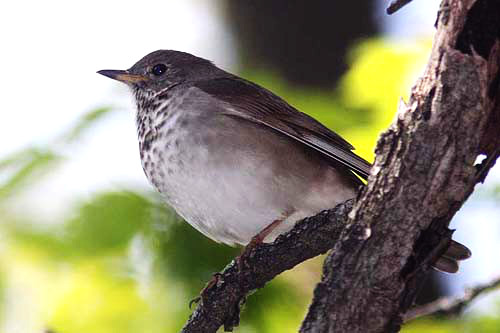 Characteristics and Range This enchanting far northern songster is the least studied of the five Catharus thrushes in Canada. The Gray-cheeked Thrush has the most northern breeding range, is rarely seen on the breeding grounds by scientists or birdwatchers, and skulks in the underbrush. The Gray-cheeked and Bicknell's (C. bicknelli) thrushes were only recently recognized to be separate species. Most of the information published in the last century on "Gray-cheeked Thrush" concerned the Bicknell's Thrush (Lowther et al. 2001). The Gray-cheeked breeds across North America's subarctic and northern mountains, from coast to coast and into eastern Siberia. It is a long-distance migrant, spending the winter in northern South America.

Distribution, Abundance, and Habitat The Gray-cheeked Thrush is generally a high elevation breeder in northwestern British Columbia from the Cassiar Mountains west, with a tongue of records extending southeast through the Omineca Mountains to the northern Rocky Mountains, and a cluster of records from the highlands of the western Chilcotin. The Atlas filled distribution gaps since The Birds of British Columbia was published in 1997, but the provincial range remains essentially the same, which is much further south in British Columbia than shown in popular field guides and Lowther et al. (2001). The Atlas added possible records (singing males) from high elevation Rocky Mountain locations in the Southern Interior Mountains Ecoprovince, but did not record any in the Taiga Plains Ecoprovince. The paucity of Gray-cheeked Thrush records in the province is at least partly the result of difficult access to higher elevation habitat in the north.

Atlas point counts and Probability of Observation show that the main centre of Gray-cheeked Thrush abundance in British Columbia is still in the Northern Boreal Mountains Ecoprovince, particularly at higher elevations in western mountains and plateaus, from the Tatshenshini Basin extending southeast into the central Sub-Boreal Interior Ecoprovince. The lower Stikine Valley, in the northern Coast and Mountains Ecoprovince supports locally high abundance, which was not reported in Campbell et al. (1997). The high Pobs values on the Liard Plateau may be the result of higher survey effort there compared to poorly-surveyed surrounding areas. Higher elevations are preferred, with highest abundance between 1,250 and 1,750 m, but the Atlas suggests nesting occurs from near sea level along the lower Stikine River to 1,870 m in the Rocky Mountains.

Across its British Columbia range, the Gray-cheeked Thrush inhabits shrubby open parkland and dense thickets of stunted of Subalpine Fir (Abies lasiocarpa), spruce (Picea), alder (Alnus), and willow (Salix) species. It is also found at high elevations in open, dry Lodgepole Pine (Pinus contorta) stands in the southern Northern Boreal Mountains, often associated with water. It is likely that it nests in shrubby habitats in low elevation drainages adjacent to Alaska and across a much wider elevation range in shrubby habitats around treeline in much of mountainous northern British Columbia.

Conservation and Recommendations There appear to be no major conservation threats on the breeding grounds in the vast northern taiga, although sparse Breeding Bird Survey data suggest the species has decreased in the west of the range since 1970 (Environment Canada 2011).