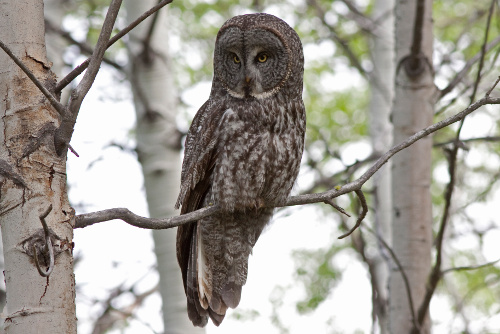 Characteristics and Range The Great Gray Owl is the largest owl in British Columbia in linear dimensions (the Great Horned and Snowy owls are heavier); its huge, dinner-plate face and white bow-tie are distinctive. The large facial discs act as very sensitive external ears; Great Grays can locate and capture voles under a deep snow pack or pocket-gophers just below the surface of the ground. These are birds of the world's vast boreal forests, in North America occurring from Alaska to the Great Lakes and south in the western cordilleras to northern California and northwestern Wyoming (Bull and Duncan 1993).

Distribution, Abundance, and Habitat The Great Gray Owl is resident throughout the interior of British Columbia; during the Atlas it was found in in only one square in the Coast and Mountains ecoprovince (on the western edge of the Chilcotin Plateau) and was totally absent from the Georgia Depression. The distribution of Atlas sightings was very similar to those reported in The Birds of British Columbia when published in 1990, although the Atlas filled in gaps in the Northern Boreal Mountains ecoprovince. It is generally found at mid-elevations, from 500 m to 1250 m. Sightings were too few to generate a Probability of Observation model or make abundance comparisons.

Conservation and Recommendations The Great Gray Owl population in Canada is considered stable overall, with periodic fluctuations that track prey abundance (Environment Canada 2011). The primary threat to its habitat is clearcut logging, which removes roosting and nesting habitat, and often provides few or no perches for hunting (Bull and Duncan 1993).