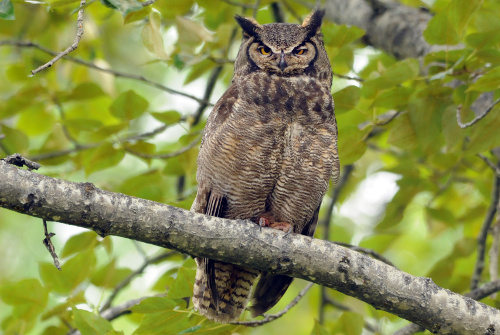 Characteristics and Range The Great Horned Owl is one of the most widespread owl species in British Columbia; the mellow "hooo-hoo-hoo-HOOO-hoo" duets of paired birds are a common sound of late winter evenings across most of the province. It is also the most massive owl that breeds in British Columbia; females can weigh over 2 kg. Its large size makes it relatively easy to identify; the Long-eared Owl is smaller and more slender with "ear" tufts located more centrally on the head, the Great Gray Owl is larger in length and wingspan but lighter in weight, and lacks "ear" tufts. It is a very adaptable species, found in almost all terrestrial habitats from the Boreal Forest of North America south to northern Central America, thence mostly at higher elevations through South America to Tierra del Fuego. All populations are resident, although long-distance dispersal, especially of young birds, is common.

Distribution, Abundance, and Habitat Great Horned Owls breed at all elevations below alpine tundra throughout British Columbia except Haida Gwaii. There are no obvious concentrations of population based on the Probability of Observation model, though the Southern Interior, Boreal Plains, Georgia Depression and Central Interior ecoprovinces have the highest PObs values. There is a clearer preference for some of the drier biogeoclimatic zones (Ponderosa Pine, Bunchgrass, Coastal Douglas-fir, Interior Douglas-fir) based on PObs values. This likely reflects on the Great Horned Owls preference for open woodland habitats (Artuso et al. 2014).

There does not seem to be a significant change in range since The Birds of British Columbia was published in 1990. The Great Horned Owl is not well monitored because of its nocturnal habitats. Canadian Breeding Bird Survey data show little change in population over the past 40 years, but these data have low reliability. This is a long-lived species, and many pairs do not breed in years of low prey populations, primarily those of their main prey, the Snowshoe Hare (Lepus americanus) and are difficult to detect during those periods.

Like all owls, Great Horned Owls do not build their own nests. In British Columbia they primarily use old stick nests built by crows and Common Ravens, larger hawks, Great Blue Herons and other larger birds; the nests are located either in trees, on cliff ledges, or on man-made structures such as bridges.

Conservation and Recommendations The Great Horned Owl is relatively common and very adaptable for a large raptor, often breeding in suburban or even urban habitats, so at present there is no conservation concern for the species. Continued monitoring through nocturnal owl surveys and future atlas projects will be important for tracking the population status and where require the management of this common owl.