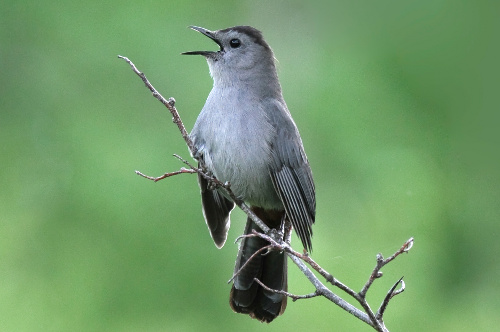 Characteristics and Range The Gray Catbird is a frequent summer visitor to southern British Columbia, although not as common a backyard bird in our province as it is across the eastern half of North America. It is the only member of the genus Dumetella, which means "small thicket", its favoured habitat. It is prone to skulk, but draws attention to itself through its wide-ranging and often fairly loud vocal mimicry. The Gray Catbird imitates the sounds of many other birds as well as commonly uttering its well-known, cat-like call notes. It winters from the Southern Coastal Plains into Central America and the Caribbean, and rarely South America (Smith et al. 2011).

Distribution, Abundance, and Habitat The Gray Catbird breeds across the southern half of British Columbia, its distribution centred on the river valleys of the Southern Interior and the Southern Interior Mountains. It occurs more sparingly in the Central Interior, Georgia Depression and southern Coast and Mountains ecoprovinces. Atlas confirmation of breeding in the upper Skeena River catchment and probable breeding in the Peace River lowlands suggest that the species has been spreading northward since The Birds of British Columbia was published in 1997.

The strongly dendritic pattern of the Gray Catbird's Probability of Observation map elaborates on the distribution, showing that the species is most likely to be found in valley bottoms, mainly in the Okanagan, Columbia, Kootenay and Duncan river valleys. Atlas point count data support this, showing the highest abundance in the 250-500 m elevation band. The core of British Columbia's population remains in the valley systems of the Southern Interior and Southern Interior Mountains ecoprovinces, as noted in Campbell et al. (1997). Since the Gray Catbird has loud and characteristic vocalizations during the breeding season and nests at fairly low elevations that coincide with human settlement, it is likely that Atlas survey efforts accurately reflect the bird's true distribution and abundance.

Found in thickets and brushy edge habitats, the Gray Catbird hides its nest in the centre of dense, leafy shrubs. The bird is uncommon in forest, much preferring wide edge habitat in riparian areas, and extensive shrubbery and blackberry (Rubus species) tangles along dikes, rail and fence lines, lanes, and gullies. It will occasionally nest in gardens and around fields and orchards. It is seldom found far from cover (Campbell et al. 1997). These microhabitat features better define where the Gray Catbird is found than broad habitat types.

Conservation and Recommendations Not considered to be at risk, populations of Gray Catbird have likely benefitted from forest clearing and subsequent regeneration of shrubby second growth, and the creation of bushy edges along transportation corridors. Although the Gray Catbird has shown population decreases in parts of eastern North America, Breeding Bird Survey data from British Columbia show a long term increasing trend. Future atlassing will be important in documenting whether this trend and apparent range expansion continue.