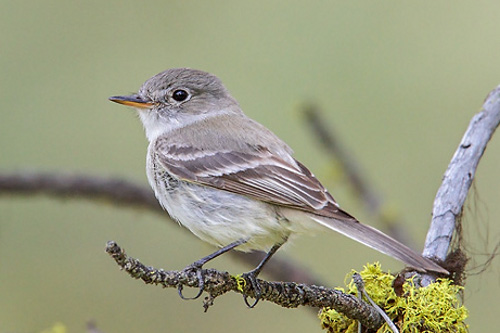 Characteristics and Range This typical Great Basin species is readily distinguished from other Empidonax species by its tail-dipping habit, long, pale lower mandible tipped with black, and (as always in this genus), distinctive vocalizations. A short- to medium-distance migrant, it breeds in drier woodlands of the Great Basin and intermontane regions of western North America, and winters mainly in Mexico and in small numbers farther north. The Gray Flycatcher has undergone a dramatic northward range expansion since the 1960s. Prior to 1970, it was unknown north of central Oregon. It was first recorded in Washington in 1970, and first nested there in 1972 (Yaich and Larrison 1973); in British Columbia, it was first recorded in the Okanagan Valley in 1984, and first nested there in 1986 (Cannings 1987, Campbell et al. 1997).

Distribution, Abundance, and Habitat This species is found regularly in British Columbia only in the Okanagan Valley. The range expansion into southern British Columbia seems to have slowed down since the 1980s, but may not have stopped. The occurrence during the Atlas of a singing male on territory near Barnes Lake in the lower Thompson drainage may be evidence of a continuing northward movement.

The Gray Flycatcher occurs only in the Southern Interior Ecoprovince, with Atlas records from only eleven 10-km squares, so there are too few data to model Probability of Observation or calculate abundance. Nearly all locations are in the Ponderosa Pine biogeoclimatic zone, spanning an elevation range of approximately 500 m.

In British Columbia, this species is found mainly in the ecotone between Ponderosa Pine (Pinus ponderosa) woodlands and shrub-steppe grasslands. This habitat overlaps that used by the Dusky Flycatcher; the two species breed side by side in parts of the Okanagan Valley. In much of the western United States, the Gray Flycatcher breeds commonly in large tracts of sagebrush (Artemesia species) at some distance from any trees, but it has not been found in such habitats in British Columbia. The bird found in the lower Thompson was in atypical habitat, a recently burned, open Douglas-fir (Pseudotsuga menziesii) forest with some sagebrush present; there is also plenty of typical habitat for the species here, and future breeding in this area is quite possible.

Conservation and Recommendations The Gray Flycatcher appears to be increasing in all parts of its breeding range based on data from the Breeding Bird Survey (Sauer et al. 2014). It is Blue-listed in British Columbia; this is because of the small current range and population size, and not because of any known threats to the species. Continued monitoring through programs like eBird and future atlassing efforts will be important in documenting any further range changes.