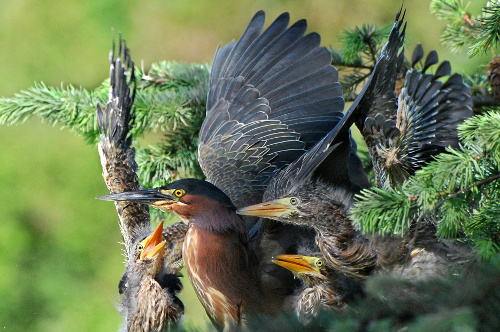 Characteristics and Range The Green Heron is a small, short-legged and stocky-necked heron of North and Central America. It breeds across eastern parts of the continent and along the Pacific Coast into far northern South America and the Caribbean. The subspecies inhabiting British Columbia, B. v. anthonyi, is one of at least four in North America; intra- and inter-specific relationships of the Green Heron have been described as something of a taxonomic yo-yo (Davis and Kushlan 1994). The Green Heron was first reported in this province in 1953; by the 1990s it had spread along the east coast of Vancouver Island and the lower Fraser River valley, with a few scattered sightings elsewhere in southern British Columbia (Campbell et al. 1990). Green Herons are present year-round in extreme southwestern British Columbia.

Distribution, Abundance, and Habitat In British Columbia, the Green Heron is largely restricted to the Georgia Depression Ecoprovince. This distribution has not changed greatly from when The Birds of British Columbia was published in 1990. Occasional occurrence away from the Georgia Depression, as noted by Campbell et al. (1990) continues; during the Atlas there was a single record from the Columbia River valley. At least 31 locations were reported during the Atlas project with some level of breeding evidence.

The Green Heron is nowhere abundant in the province. Too few data are available to generate a Probability of Observation model or make any abundance inferences, other than the species remains relatively scarce as a breeder in British Columbia. Only six nests had been found by 1990 (Campbell et al. 1990). Six were found during the Atlas; however, most breeding confirmations were from fledged young. Green Herons occur largely at low elevations, below 250 m.

This heron breeds along riparian edges of slow moving rivers, streams, ponds and sloughs, including in stands of Red Alder (Alnus rubra). It appears to be tolerant of at least some habitat degradation and disturbance based on successful nesting attempts that fledged several young adjacent to industrial sidings in Metro Vancouver.

Conservation and Recommendations The Green Heron is Blue-listed by the British Columbia Conservation Data Centre because of moderate threats to wetland habitats from development in the Georgia Depression. However, the species is considered to be resilient and tolerant of human disturbance, and of no conservation concern continentally (Sauer et al. 2014).