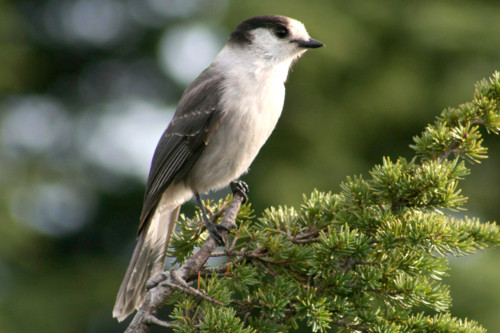 Characteristics and Range Historically known as the Canada Jay, the Gray Jay is one of North America's boldest and most widely distributed jays. This endemic, medium-sized songbird is a year-round resident found throughout the Boreal Forest, and in montane forests of western North America. Hikers, campers, hunters, and trappers commonly encounter this gregarious jay, earning it nicknames like "Whiskeyjack", "Camp Robber", and "Moose Bird". Characterized by a long tail, small bill, crestless white head with a dark crown patch, dark upperparts and light underparts, the Gray Jay is not likely to be confused with any other North American jay.

Distribution, Abundance, and Habitat The Gray Jay is widespread throughout northern and central interior British Columbia, and on higher plateaus and mountain ranges in southern portions of the province, including the southwest coast and Vancouver Island. The range has not changed since The Birds of British Columbia was published in 1997.

The Probability of Observation model refines this picture, showing that it is most likely to be found on the higher plateaus and in the mountain ranges of central and northern British Columbia, and the lowlands in the far northeast. The general pattern of abundance based on Atlas point counts shows that it reaches highest abundance in the Northern Boreal Mountains and Taiga Plains ecoprovinces, and becomes gradually less common with decreasing latitude, with lowest abundances in the south. This finding contrasts with Campbell et al. (1997), who considered it most numerous in the Southern Interior Mountains ecoprovince, although the PObs model generates high values across a portion of the Rocky Mountains in this area. Estimates of abundance may be slightly higher than actual numbers given the species' willingness to interact with humans (Strickland and Ouellet 2011), although this behaviour does not appear to vary greatly across the province.

In British Columbia, as throughout its North American range, the Gray Jay most often resides in habitats dominated by spruce (Picea) species, reflected in the highest abundance values in spruce-dominated biogeoclimatic zones. The broad elevation range (750-2,250 m) that supports higher abundances likely reflects the latitudinal differences in preferred habitats, from higher elevations in the south to lower elevations in the north.

Conservation and Recommendations The Gray Jay is considered secure in British Columbia and provincial and national Breeding Bird Survey results indicate stable populations (Sauer et al. 2014). Recent concern has been raised about shorter winters and warmer temperatures affecting food cache viability, and thus survival, in southern parts of the range in Ontario (Strickland and Ouellet 2011). Partners in Flight considers the Gray Jay a stewardship species, representative of its boreal biome, suggesting that careful attention be paid to future population trends as they may reflect larger changes in boreal and subalpine habitats.