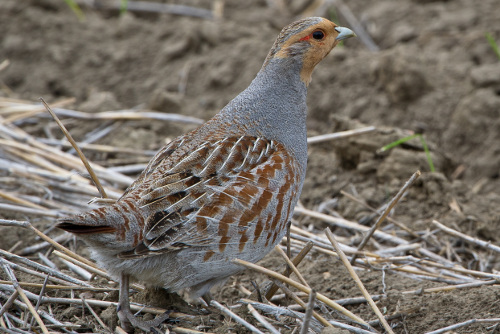 Characteristics and Range The Gray Partridge is a game bird often found in close association with people in farming communities. Perhaps as a consequence, it is frequently introduced outside its native range spanning much of Eurasia, and now breeds across a wide swath of the Prairie and western biomes of North America, with small outlier populations as far east as agricultural regions of north-eastern North America (Carroll 1993).

Distribution, Abundance, and Habitat Gray Partridges were introduced into the Lower Mainland, the Saanich Peninsula and Gulf Islands, parts of the Chilcotin Plateau, and the Fraser Plateau (Campbell et al. 1990); all of those populations died out between the 1930s and early 1970s. Successful introductions into eastern Washington resulted in a population becoming established in the Okanagan and Kettle Valleys by the 1920s. That population has persisted, though in recent decades numbers have been relatively low. When The Birds of British Columbia was published in 1990 most recent records were from agricultural habitats in the Vernon area, but that population has apparently died out. The current centre of distribution appears to be the native grasslands of the south Okanagan, the only region it was confirmed to breed in during the Atlas. It was also recorded by the Atlas in the Peace River lowlands of the Boreal Plains Ecoprovince.

Campbell et al. (1990) note that historically the highest numbers were found in the north Okanagan. During the Atlas, it was nowhere common, and breeding was confirmed only in the south Okanagan. The Gray Partridge is a bird that often becomes well known where it is found, and therefore Atlas estimates of breeding success in restricted locations should be reasonably accurate. Changes in abundance and distribution over time may be related to loss of small populations; or changes in farming practices that may lead to decreases in cover like hedgerows, early mowing of crops like alfalfa and grains, or increased use of pesticides (Campbell et al. 1990; Carroll 1993).

During the Atlas, the Gray Partridge was found in grasslands, suburban/parkland interfaces, and agricultural regions with nearby cover. These are the habitats this species prefers throughout North America, where it does best in a mixed agricultural setting with cereal crops and nearby cover. It may exploit roadsides, ditches, and hedgerows, and prefers the proximity of some cover, especially during the winter (Carroll 1993). In regions throughout North America where agriculture has intensified and associated cover has declined, populations of the Gray Partridge have suffered (Carroll 1993).

Conservation and Recommendations As a locally distributed, introduced game bird which has failed in several introduction areas, there appear to be no conservation concerns; the primary reason for considering a management strategy is driven by hunting interest.