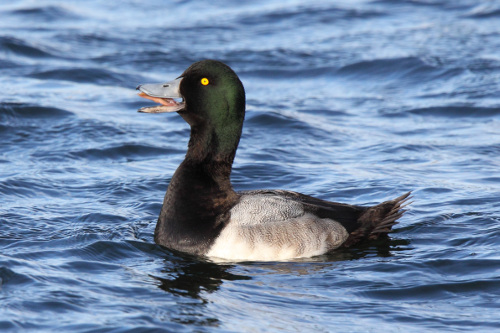 Characteristics and Range The Greater Scaup has a Holarctic distribution, with most breeding in North America confined to high latitudes in Alaska and northern Canada. It is well known as an abundant winter visitor to coastal British Columbia, and a common migrant and locally common winter visitor in the interior. Breeding has not been confirmed in this province, but there is tantalizing evidence that it might breed in the far northwest. Confusion with the Lesser Scaup, which is far more common in North America (including in British Columbia), has reduced the reliability of population data and trends, and even breeding records of the Greater Scaup (Kessel et al. 2002, Barclay 2012).

Distribution, Abundance, and Habitat Sightings of Greater Scaup during the breeding season are scattered across the province, but breeding has not been confirmed to date (Campbell et al. 1990, Kessel et al. 2002, British Columbia Conservation Data Centre 2014). Evidence of likely breeding from Atlas data is confined to the Northern Boreal Mountains Ecoprovince in the far northwest, where probable breeding (pairs in suitable habitat or displaying) was reported in four locations in the Atlin to Dease Lake region. Other records of possible breeding in these regions are less convincing and merely involved birds in suitable habitat.

If this species does breed in British Columbia it seems certain that the breeding population is small, likely under 50 pairs. The North American populations of both scaup species (they are censused together, but most are Lesser Scaup) generally show long term declines (1970-2005) but some increases since 2005 (Barclay 2012, Canadian Wildlife Service Waterfowl Committee 2013).

Greater Scaup typically nest in tundra-like, largely treeless vegetation, in grassy edges of relatively shallow (1-2 m) lakes and ponds or sheltered bays of larger lakes (Kessel et al. 2002). In British Columbia such habitat is most likely to be found in alpine areas in the Northwestern Interior Forest Bird Conservation Region.

Conservation and Recommendations The species is not thought to be a conservation concern in British Columbia. Barclay (2012) cites major declines in North America as a reason to consider reviewing its conservation status. High female mortality is a significant reason for declining populations, and other likely factors at estuarine wintering grounds include pollution, human disturbance, and declining food (Kessel et al. 2002, Barclay 2012).

It would be exciting to add this species as a confirmed breeder in the province, and birders, biologists and naturalists visiting the northwest corner of British Columbia are encouraged to search for evidence of breeding by Greater Scaup.