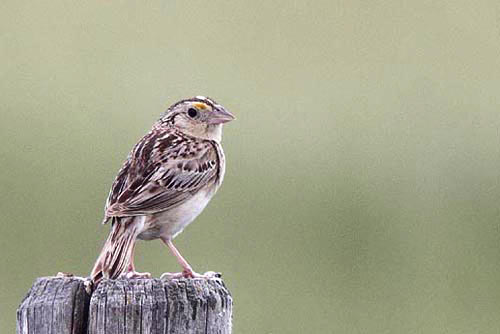 Characteristics and Range The quiet, buzzy, insect-like song of this furtive, ground-feeding sparrow is the source of its English common name. Grasshopper Sparrows breed mainly across eastern North America, from the southern Canadian Prairies, south to northern Texas and east to the Atlantic Coast. In western North America they are patchily distributed in dry grasslands from southern British Columbia to Mexico. They are short- to medium-distance migrants, and winter in the Southern Coastal Plain of the United States, south through Mexico to Central America and Cuba (Vickery 1996).

Distribution, Abundance, and Habitat In British Columbia, Grasshopper Sparrows breed only in the Southern Interior Ecoprovince almost entirely in the Okanagan Valley, with a few records from the southern Similkameen Valley and the Nicola Valley. The breeding range has not changed since The Birds of British Columbia was published in 2001. Their secretive nature and the faint call make confirming breeding difficult, which is why none of the ten 10km-squares where they were found had confirmed breeding. Cannings (1995) describes nine breeding locations that coincide with the locations where the species was found during the Atlas.

The majority of Grasshopper Sparrows are on the benches and hills supporting native grasslands south of Okanagan Lake, mainly on the east side of the valley. A few occur at the north end of Okanagan Lake. The small breeding population in the Nicola Valley near Chapperon Lake noted by Cannings (1995) was not detected during the Atlas period. There are insufficient data to generate a Probability of Observation map.

Grasshopper Sparrows nest singly or in small groups on the ground in dry grasslands, generally with the native Bluebunch Wheatgrass (Pseudoroegneria spicata) and scattered shrubs. Campbell et al. (2001) note that Grasshopper Sparrows may be an irregular breeder in the province and not present in every breeding season.

Conservation and Recommendations There are insufficient data from Breeding Bird Survey routes in British Columbia to determine a trend in the province, however, Grasshopper Sparrows have shown substantial long-term declines across North America, mainly due to conversion of native grasslands to agriculture. In British Columbia, protecting remaining suitable grasslands from residential development, heavy grazing or conversion into agricultural crops is important. Managing grasslands with light grazing and prescribed burns are some of the recommendations for enhancing Grasshopper Sparrow breeding areas (Fraser et al. 1990, Vickery 1996).