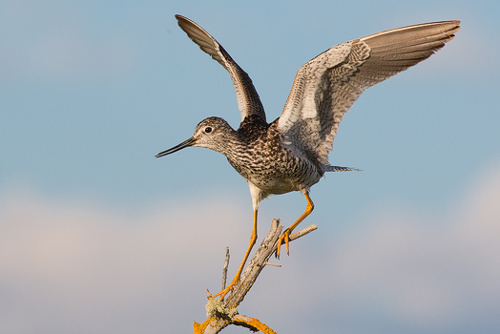 Characteristics and Range With its tall, slender build, long yellow legs and distinctive call, the Greater Yellowlegs is easily separated from other shorebirds, except the smaller but similar-looking Lesser Yellowlegs. Although the Lesser Yellowlegs has a larger continental population (Andres et al. 2012), in British Columbia the Greater Yellowlegs is more often seen and has a larger breeding population (Campbell et al. 1990, Atlas data). Breeding occurs in boreal and coastal wetlands from western Alaska to the Atlantic Coast, with sparse and irregular breeding to the north and south of this band (Elphick and Tibbits 1998). The Greater Yellowlegs winters across a huge range covering both Pacific and Atlantic coasts (south from British Columbia and New York, respectively) and inland in the southern United States and Mexico, with some going to South America and to offshore islands (Elphick and Tibbits 1998).

Distribution, Abundance, and Habitat The core breeding area remains the central plateau of the Sub-boreal Interior and Central Interior ecoprovinces, as indicated by The Birds of British Columbia published in 1990. Atlassing, however, reveals confirmed or probable breeding in all other ecoprovinces, except the Georgia Depression, whereas Campbell et al. (1990) reported no confirmed breeding north of 55°N and only unconfirmed breeding records from coastal areas. The Atlas data therefore indicate an expansion of the breeding range of the Greater Yellowlegs in British Columbia since the 1980s in many directions, relative to the central core. Since the Atlas, Chutter (2016) reported breeding in 2014 by at least 17 pairs near the northern tip of Vancouver Island. The Probability of Observation maps correspond well with the breeding distribution, showing core areas in the central plateau and in the Taiga Plains Ecoprovince.

As suggested by its extensive continental range (Elphick and Tibbits 1998), the Greater Yellowlegs is clearly an adaptable species, although strongly associated with boggy microhabitats. Breeding in British Columbia is confirmed in many ecoprovinces and from sea level to over 1,750 m. The Atlas data show highest breeding abundance from 500 to 1,500 m and in boreal or sub-boreal biogeoclimatic zones dominated by White Spruce (Picea glauca), Black Spruce (Picea mariana) and pine (Pinus) species. Nests are typically simple scrapes or depressions, sparsely lined with bits of vegetation, in boggy or muskeg habitat with low conifers (often < 2 m tall) and near the wetlands in which the adults and chicks feed (Campbell et al. 1990, Elphick and Tibbits 1998).

Conservation and Recommendations The species is considered to be not at risk. The global population is estimated at 137,000 birds; information on trends is sparse but migration counts suggest a slight long-term increase and a currently stable population (Andres et al. 2012). There is localized loss of breeding range habitat due to drainage of wetlands, and it is possibly limited by habitat conditions at wintering sites (Elphick and Tibbits 1998). Future atlassing will show whether the expansion of the breeding range in the province stabilizes or continues to change.