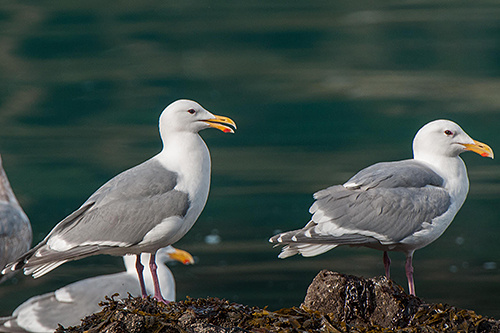 Characteristics and Range The Glaucous-winged Gull is a large white-headed gull endemic to the northwestern coast of North America. As year-round residents, they are widespread and common from the Bering Sea to the Columbia River in northern Oregon; some winter as far south as Baja California. Adults have a white head, neck, breast, and tail with a uniform light grey mantle and wingtips. This gull is a familiar sight in many coastal cities and towns along the northeast Pacific Coast. Glaucous-winged Gulls hybridize with Western, Herring, and to the north of British Columbia, Glaucous Gulls (L. hyperboreus) (Williamson et al. 1963, Merilees 1974, Bell 1996). Resulting hybrids have quite a variable appearance and can be challenging to identify.

This gull breeds singly, and in small and large colonies on offshore islands. The Probability of Observation model closely matches the distribution, indicating that rocky coastlines with numerous islets and mainland inlets are the most important breeding areas. Approximately 75 colonies were reported during the Atlas with 11 of those colonies having more than 30 active nests. Largest colonies have over 2,000 nests. The three largest colonies are in the Salish Sea on Mitlenatch, Mandarte, and Chain Islets/Great Chain Island (Blight 2014). The largest colony outside the Salish Sea is on Cleland Island off the west coast of Vancouver Island. Some island colonies used by Glaucous-winged Gulls are remote and difficult to access, especially on the central coast and around Haida Gwaii, therefore not all known colonies were surveyed during the Atlas.

Glaucous-winged Gulls typically choose natural sites to nest, but in some areas including southeastern Vancouver Island and the Fraser River delta, they have begun nesting on breakwaters, and on the roofs of waterfront buildings. Generally an inshore water species, Glaucous-winged Gulls can be found in nearly every habitat type in coastal British Columbia, from pelagic offshore waters to beaches and rocky coastlines, mudflats, estuaries, and the deltas of rivers and streams.

Conservation and Recommendations Based on a review of historical breeding data, numbers of nesting Glaucous-winged Gulls in the southern Strait of Georgia peaked during the 1980s and have been declining steadily since then (Blight et al. 2015). Winter survey data from several monitoring programs in the Salish Sea also indicate ongoing, long-term declines (Crewe et al. 2012, Anderson et al. 2009, Bower 2009). Studies have documented a significant decline in egg size and clutch size for Glaucous-winged Gulls, which may reflect changes in the availability of high quality marine prey (Blight 2011). The decreases may also be linked to greater disturbance and predation by increasing numbers of Bald Eagles, habitat impacts, or other factors. Many Glaucous-winged Gull breeding colonies in British Columbia are within protected areas (e.g., Mitlenatch Island Ecological Reserve).