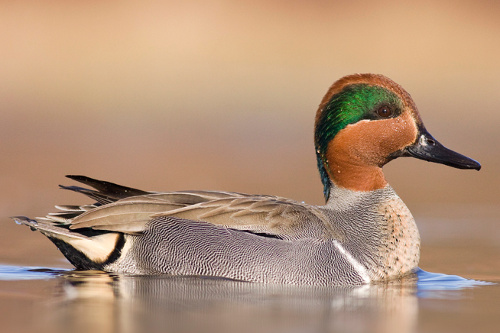 Characteristics and Range The Green-winged Teal is North America's smallest dabbling duck. The male's cinnamon head with an iridescent green crescent running through the eye makes it easily recognizable. There are three recognized subspecies: A. c. carolinensis in North America, A. c. crecca in Eurasia, and A. c. nimia resident on the Aleutian Islands. In North America, it breeds from treeline to the Great Lakes and central Great Plains, and winters from coastal Pacific Northwest to central Mexico and the Caribbean. In the Palearctic, it breeds across northern Eurasia and winters south to northern Africa and southern Asia (Johnson 1995).

Distribution, Abundance, and Habitat The Green-winged Teal breeds throughout the interior of British Columbia and at a few locations on the coast. The Atlas records showed a breeding distribution similar to that in The Birds of British Columbia published in 1990, with most nesting below about 1,250 m.

The highest Probabilities of Observation were in the Boreal Plains and the Taiga Plains ecoprovinces, with the former matching the densest cluster of breeding records, while the latter had far fewer records. Too few data were collected on point counts to draw any conclusions on abundance; randomized point counts generally don't sample the wetland habitats of Green-winged Teal very well.

Conservation and Recommendations There are no overall conservation concerns for this species. Populations of the Green-winged Teal have doubled over the last three decades in the western Boreal Forest, which includes northeastern British Columbia Shifts in aquatic food webs due to climate change may be favouring generalist species such as the Green-winged Teal (NABCI-Canada 2012).