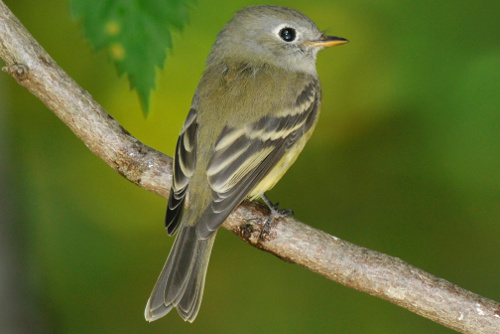 Characteristics and Range The Hammond's Flycatcher is often confused by birders with the similar-looking Dusky Flycatcher; both are widespread and rather common flycatchers of forested habitats, and overlap considerably in habitat preference. Although there are similarities in the songs of the two, once learned they can be readily and reliably distinguished. The Hammond's Flycatcher is a western North American species, breeding in conifer forest from Alaska's Brooks Mountains to the southern Rocky Mountains and Sierra Nevada. It spends the winter in the Mexican Sierra Madre and south in the mountains to Nicaragua.

Distribution, Abundance, and Habitat The Hammond's Flycatcher breeds through most of the province, including the coastal slope where the Dusky Flycatcher is largely absent. There has been no significant change in range from that shown by Campbell et al. (1997), but the Atlas has filled many distribution gaps in northern British Columbia. It appears to reach its northeastern range limit along the Fort Nelson River valley in the Taiga Plains. Whilst migrants are recorded on Haida Gwaii in spring, there is no proof of breeding there

The Probability of Observation and abundance values for this species are highest in the Southern Interior Mountains, Georgia Depression, and Sub-Boreal Interior ecoprovinces. This expands on Campbell et al. (1997), who singled out the Southern Interior Mountains as supporting the highest numbers. The Hammond's Flycatcher appears to have a particular affinity for the Interior Cedar-Hemlock and Coastal Western Hemlock biogeoclimatic zones, which have the highest abundance values. It occurs commonly at all altitudes from sea level to 1,500 m, but is most abundant between 750 and 1,250 m.

This species occupies a variety of forest types, including both coniferous and mixed, but prefers mature or old-growth stands with a continuous canopy. It is common in Douglas-fir (Pseudotsuga menziesii) stands, in mid-elevation stands dominated by spruce (Picea) and fir (Abies) species, in lower-elevation coastal forests, and in riparian stands where tall cottonwood (Populus) species are mixed with spruces or other conifers. However, it does not usually breed in open Ponderosa Pine (Pinus ponderosa) forest, or in upper-elevation subalpine forests.

Conservation and Recommendations Breeding Bird Survey data indicate stable or slightly increasing populations of this species over the last 50 years, both continent-wide and in British Columbia (Sauer et al. 2014). No conservation concerns have been expressed about Hammond's Flycatcher.