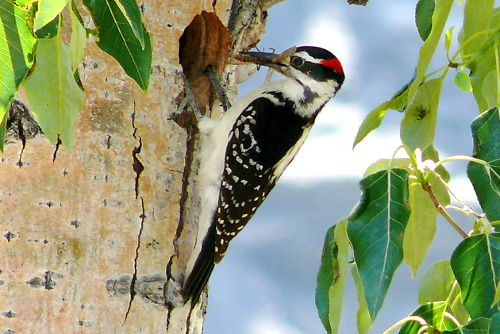 Characteristics and Range This black-and-white, robin-sized woodpecker is among the most widespread and familiar of North American birds. It is also one of the most geographically variable North American birds, varying in size and colour across its range. The Hairy Woodpecker occurs across North America from near the northern limit of boreal forest south throughout the United States and, in disjunct populations, to highland forests of Central America (Jackson et al. 2002). It is generally a resident species, although it may move locally in winter.

Distribution, Abundance, and Habitat The Hairy Woodpecker is a widespread, resident breeder throughout British Columbia, mainly in the southern two-thirds of the province. A well-defined, endemic, insular population (P. v. picoideus) is resident on Haida Gwaii. The distribution from the Atlas is similar to that reported when The Birds of British Columbia was published in 1990.

The Atlas found the most extensive areas of high Probability of Observation in the Southern Interior and Coast and Mountains ecoprovinces, including on Haida Gwaii. Atlas point count data confirmed that these regions support a slightly higher abundance than other ecoprovinces. There was no clear elevation preference; abundances were similar across the broad altitudinal range (sea level to 1,750 m) where most breeding occurs.

The Hairy Woodpecker is found in all types of forests, but prefers coniferous or mixed forests, particularly forest edges, and nests in large dead stubs or in living trunks of trees with fungal decay. Point counts showed no appreciable differences in abundance between most biogeoclimatic zones.

Conservation and Recommendations There appear to be few immediate threats to this species in Canada. There has been a significant increase in abundance in British Columbia since 1970 (Environment Canada 2014). This is in contrast to the Downy Woodpecker which has shown a large decrease in abundance in British Columbia over the past decade. The subspecies P. v. picoideus is provincially Blue-listed; very little is known about its ecology. Disturbance and loss of critical foraging and nesting features from development and logging are considered one of the most significant threats (Zevit 2010). Because this subspecies is endemic to Haida Gwaii, and therefore has a restricted range and is vulnerable to extinction, it should be managed on an ecosystem level (Cooper et al. 2004).