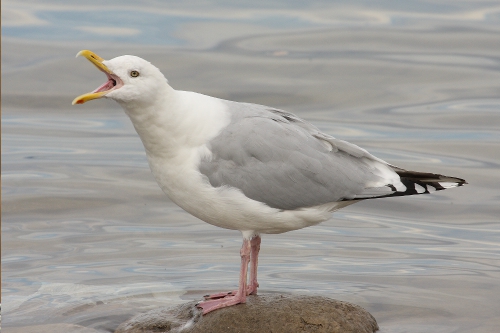 Characteristics and Range The Herring Gull is among the largest gulls to occur regularly in British Columbia. Its global range spans much of the Northern Hemisphere. In North America, it breeds across the continent in the boreal, arctic and Great Lakes regions, and south to the mid-Atlantic Coast states, and winters along most of both Pacific and Atlantic coastlines into the Gulf of Mexico and Caribbean, and inland at unfrozen lakes, especially around landfills. It is a very familiar species in eastern North America but is somewhat more local in the west, including British Columbia, especially as a breeding species. Unusually for a gull, it was nearly extirpated from North America in the 19th Century by plumage hunters and egg collectors. It has since recovered through protection, and may now be more numerous than historically, possibly assisted by abundant food in human refuse (Pierotti and Good 1994).

Distribution, Abundance, and Habitat The Herring Gull breeds mostly on lakes and rivers across northern and central parts of British Columbia. The Atlas reconfirmed clusters of breeding in northwestern British Columbia, across the central plateau regions and sparingly at sites in the south-central interior, and detected probable breeding at locations like Kotcho Lake and the Liard River in the far north where breeding was known when The Birds of British Columbia was published in 1990. The Herring Gull may be expanding its breeding range within the province, since the Atlas records breeding for the first time in three regions: the north coast near Prince Rupert, west Williston Lake in the Peace River watershed, and the Thompson River drainage.

The Herring Gull nests singly or in compact colonies safe from predation on rocky islets, headlands, boulders, and forested islets on lakes. Other gull species, American White Pelicans, and Arctic Terns may also nest in the same colonies (Campbell et al. 1990). The only large colony reported during the Atlas (approximately 80 nests) is on the Chilcotin Plateau; just five other colonies of 3-6 nests were reported. The Herring Gull prefers lakes and rivers with sheltered, predator-free nest sites and nearby foraging habitat in a wide variety of biogeoclimatic zones.

Conservation and Recommendations At present the Herring Gull is not of conservation concern in British Columbia. It would be desirable to inventory all nesting sites within the province to establish a baseline for population studies.