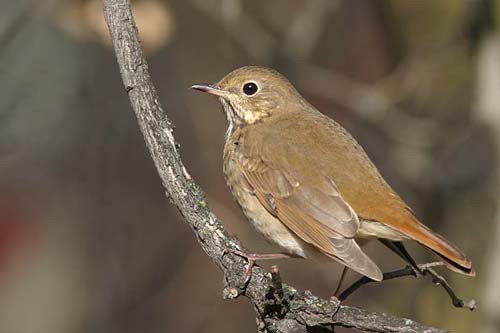 Characteristics and Range The Hermit Thrush is named partly for its skulking behaviour; it does an excellent job of hiding amongst the dense understory and remaining out of sight despite its beautiful flute-like song that is arguably one of North America's most beautiful bird voices. Like many other members of its genus, the Hermit Thrush's plumage is a drab combination of a dark tan brown back and wings, a rufous rump and tail, and a spotted creamy breast. It breeds across the Boreal Forest from coast to coast, and south into the northern Appalachian Mountains and the western cordilleras. The Hermit Thrush is a short to medium distance migrant, overwintering in small numbers as far north as southern British Columbia, although most individuals head much farther south to Mexico and Central America (Dellinger et al. 2012).

Distribution, Abundance, and Habitat In British Columbia, the Hermit Thrush is widespread, although not as densely distributed as its congener the Swainson's Thrush. This wide provincial range is unchanged since The Birds of British Columbia was published in 1997, but many distribution gaps have been filled by the Atlas surveys.

The Probability of Observation model shows the Hermit Thrush is most likely to be found on Haida Gwaii, on plateaus in the Central Interior Ecoprovince, across the Taiga Plains Ecoprovince, and at higher elevations in several of the major mountain ranges. Point count data show highest abundances in the Coast and Mountains, Southern Interior Mountains, and Central Interior ecoprovinces, which expands the known centre of abundance from Haida Gwaii as reported by Campbell et al. (1997). It is most common in the spruce and hemlock-dominated biogeoclimatic zones, and between 1,500 and 2,250 m.

Hermit Thrush is found as high as 2,470 m in the alpine of the Southern Interior Mountains Ecoprovince, but it occurs down to sea-level, especially in the cool coastal forests directly abutting the Pacific Ocean along Vancouver Island, Haida Gwaii, and the central and north coasts.

The Hermit Thrush prefers cooler, higher elevation, and more coniferous forests relative to the Swainson's Thrush, and arrives earlier in the spring. The Hermit Thrush often places its nest close to or even on the ground, in trees or shrubs, in amongst roots, in cavities in trees or rocks, and under logs (Campbell et al. 1997).

Conservation and Recommendations The Hermit Thrush appears to be the only Catharus thrush with stable or increasing populations over the last 40 years in North America (Dellinger et al. 2012). However, in British Columbia, there is wide uncertainty around the size of this increase and trend (Environment Canada 2014). The Hermit Thrush has been shown to be sensitive to landscape-level habitat changes like clearcuts and conversion of continuous forest to small patches, though the species appears to be able to persist in these altered landscapes when enough closed forest is present for nest placement and cover (Dellinger et al. 2012).