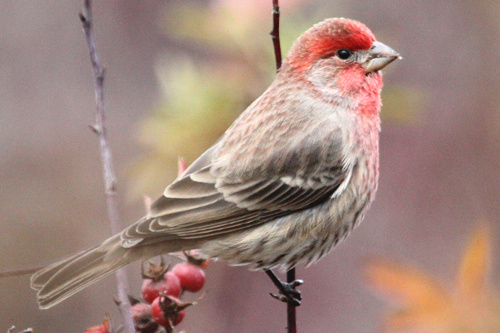 Characteristics and Range Originally a bird of the southwestern deserts and dry woodlands, this familiar finch has adapted well to the farms and gardens that have replaced forests across the continent. During the 20th Century it greatly increased its range in North America. In the east, range expansion was triggered by the release of a few individuals in New York City in 1939 (Badyaev et al. 2012). In British Columbia, this species arrived as a result of natural range expansion during the 1930s, and it has overwintered here since 1955 (Campbell et al. 2001). It is now a year-round resident across most of North America south of the Boreal Forest.

Distribution, Abundance, and Habitat The House Finch is restricted to southern British Columbia, where it is concentrated in and around urban areas and clustered adjacent to human habitations elsewhere. Comparison of the Atlas with The Birds of British Columbia suggests that the overall range of this species has not expanded since the late 1990s, although its local range around some settlements does appear to have increased, most notably in the Southern Rocky Mountain Trench.

This finch is most readily seen, and most abundant, in the Georgia Depression Ecoprovince: Campbell et al. (2001) reported that the highest numbers of this bird occur here, and this was confirmed by the Atlas. This species is also common in the Okanagan Valley and in the southern Shuswap area. In both coastal and interior locations, it is most abundant at relatively low elevations, and abundance declines abruptly with increasing elevation above 500 m. Point count data suggest that House Finch is most common in the Coastal Douglas-fir and Coastal Western Hemlock biogeoclimatic zones near the coast, followed by the Bunchgrass, Interior Douglas-fir and Ponderosa Pine zones in the interior. However, the distribution and abundance of House Finch in these areas is likely very uneven and strongly controlled by the pattern of human settlement.

Preferred breeding habitat is closely linked to human landscapes, as noted above. In cities, residential areas with trees and shrubs are preferred, including parks, golf courses, gardens, cemeteries, nearby agricultural areas and, in dry areas, in irrigated orchards and vineyards. Campbell et al. (2001) reported that most nests recorded were in evergreen trees and shrubs, while the proportion of nests supported by houses, barns, or other structures was relatively low (11%), although such nests are probably over-represented in the record because they are easier to find.

Conservation and Recommendations The provincial status is "secure"; Breeding Bird Survey results suggest an increasing population trend. However, the House Finch is susceptible to epidemics of 'eye disease' (mycoplasmal conjunctivitis) caused by the bacterium Mycoplasma gallisepticum, which reached British Columbia in 2004 (Badyaev et al. 2012). This species is also relatively susceptible to avian pox. Both diseases are contagious amongst members of a flock and could result in substantial population decline. Feeders and water containers should be cleaned regularly to reduce transmission.